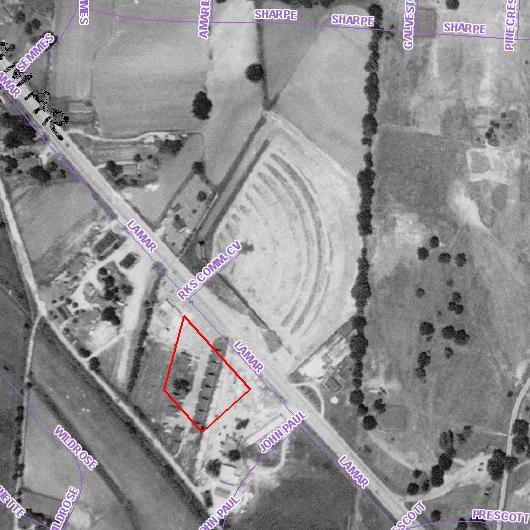 The Drive-In Movies was opened on April 30, 1940 with Marlene Dietrich in “Destry Rides Again”. It stood on Highway 78 at a present interstate interchange. Around the late-1940’s/early-1950’s it became the Lamar Drive-In and was operated by Dave and Abner Lebovitz who also operated the Skyview Drive-In in Memphis and the Sunset Drive-In in West Memphis. It was closed in 1970.

It reopened on March 22, 1973 as the Southland Drive-In screening adult movies. It closed in fall of 1977 and was occupied thereafter by a Treasury store, now closed, and a mini storage. An aerial view shows the footprint of the old property.

Some sources indicate that it also operated under the name Southland Drive-In.

I believe this drive-in opened in 1940 or a year or two thereafter and closed in 1977. It was the first drive-in for Memphis, and it was originally just called Drive-In Movies. I guess that was due to its being the only drive-in for some years. The sign on the entrance had the name Drive-In Movies, and that was how the ads read in the newspaper. I don’t think the sign at the entrance was ever changed. However, the theater was later advertised (starting in the late 40’s or early 50’s) as the Lamar Drive-in once other drive-ins had opened and there was a need for differentiation. Sometime in the early 70’s the name was changed to Southland Drive-In and so it was until its demise. The drive-in was not on the site of the Treasury department store; that was nearby.

If that’s the first drive-in in Memphis, then it was opened in 1937, based on a note about Dave Woolner, partner in Wollner Bros. Theatres, that appeared in the May 30, 1966 issue of BoxOffice. “Woolners, which built the South’s first drive-in at Memphis in 1937, said …”

Whats the name of the drive-in theatre seen across the road from the Southland Drive-in site in the above photo?