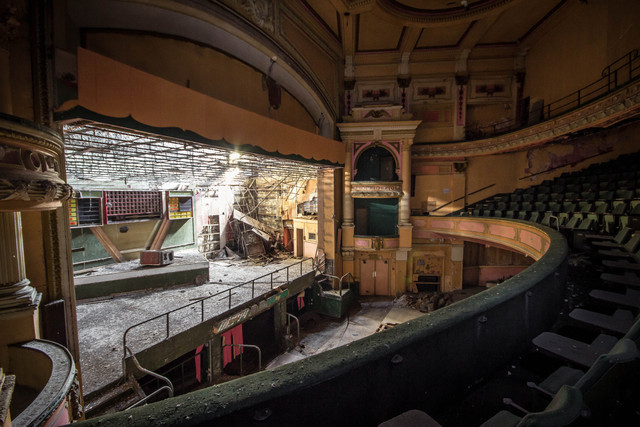 The Empire Theatre of Varieties was opened on 29th October 1894. It was designed by architect G.B. Rawcliffe, and could seat 1,500 in orchestra stalls, dress circle and gallery levels. In December 1902 famed American escapologist Harry Houdini appeared on the stage.

In 1909, it was taken over by James Pringle and films were then part of the programme. The auditorium was reconstructed in 1911, to the plans of noted theatre architect Bertie Crewe and seating increased to 1,808. Re-opening on 11th September 1911, it then remained the leading theatre in Burnley until 1930.

New owners took over and it was converted into Burnley’s ‘Superior Talkie Theatre’, possibly to the plans of Liverpool based architectural firm Lewis & Co. Re-opening on 19th May 1930 as the New Empire Cinema with Charles E. Evans in the talkie/musical “Happy Days”. Some use was made of the stage over the years, but it was mainly now used as a cinema.

The last use of the stage at the Empire Theatre was on 29th October 1966, after a weeks run of the Burnley Light Opera Company production of “The Merry Widow”. In the 1990’s it became a Gala Bingo Club, and remained so until they moved to a purpose built bingo club in another part of town in 1995.

The Empire Theatre was designated a Grade II Listed building by English Heritage in 1996. On 23rd October 2018 the stalls area was damaged in an arson attack. In 2020, the building still stands unused.

The theatre re-opened as the New Empire cinema on Monday 19 May 1930 with “Happy Days”.

The Empire was a cinema all through the 1960s and actually closed in July 1970 under the ownership of Star Cinemas when the business was transferred the following day to the new Studio 1 and 2.It was then converted for Bingo use and the business was then transferred from the Palace which was later demolished.

On their Facebook page was a report about a recent arson attack. In the stalls area of the building.

Being put up for auction.

Sold at £1: A campaign to reopen the derelict Burnley Empire Theatre has taken a major step forward, after the building was sold to a group which has been trying to save it.