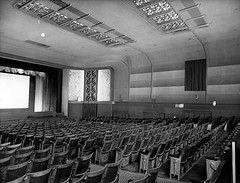 Located in the small Gloucestershire market town of Dursley. The Regal Cinema was opened on 16th December 1937. All seating was on a single level. The proscenium was 33 feet wide, and there was a small stage and some dressing rooms for visiting variety acts.

Operated by the Mayfair Circuit, it was taken over by the Associated British Cinemas(ABC) chain on 20th August 1943.

Part-time bingo was played in the 1960’s. It was taken over by the Leeds based Star Cinemas chain from 30th June 1969, and they continued a mix of films and bingo on different days of the week.

ABC took control again from 2nd March 1975. The Regal Cinema was closed on film on 22nd June 1977. Bingo continued for a while.

Eventually it became a Kwik-Save supermarket, and was demolished around June 1993.

What is of interest is that Harry Wheedon of Odeon fame was a junior archiect at the Harold Seymore Scott Practice..

The site is now occupied by a branch of Lidl. The bulk of the Regal’s floor space would be in the Lidl car park.