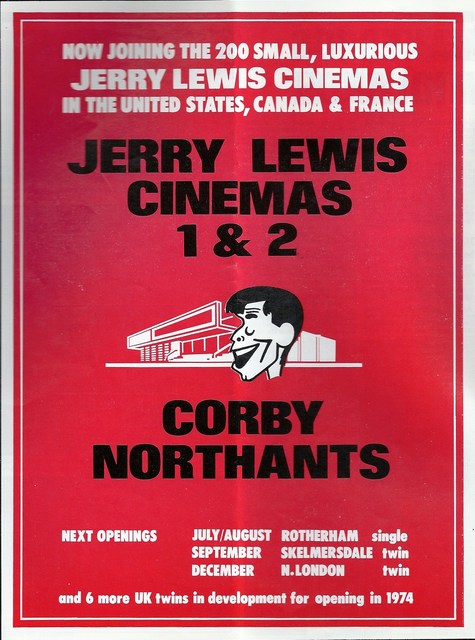 In late-1971, it was announced that the American based Network Cinema Corporation, which Jerry Lewis was a major shareholder, were planning the first of a chain of Jerry Lewis Cinemas in the UK. Originally planned for two screens, each seating 325 to open in a new multi-million pound shopping centre being built in Corby, Northamptonshire.

The Jerry Lewis Twin Cinema was opened on 7th April 1973 with stars of the ‘Carry On’ films in attendance, and free screenings of ‘Carry On….’ films to packed houses. The following day the cinema presented Simon Ward in “Young Winston” and Marlon Brando in “The Godfather”.

By 1980 it had been re-named Focus Cinema and it had a licenced bar. In September 1983, it was taken over by Ashley Wyatt and Norman Smith who operated the Ritz Cinema, Nuneaton and re-named Forum Cinema. The Forum Cinema was closed in September 1991 due to its entertainment licence being refused by the council due to lack of maintenance.

Eventually the No. 1 screen was twinned, and the No. 2 screen became a lazer centre. Forum Cinema was closed and became an over-25’s nightspot known as ‘Talkies’ on 24th September 1992. It was closed in 1996.

The Forum Cinema was demolished when the shopping centre was rebuilt in the summer of 2005.

I loved this cinema! Have very fond memories of watching some very cool 90’s movies here. It may have been crappy and falling apart, but that just added to its original character, something you don’t find anymore with these franchise multiplex chain cinemas. I’ll never forget watching Tommy Boy (1995) here, in a mostly empty screening, made me fall in love with the cinema and Chris Farley who was also taken away from us too early a few years later. RIP Talkies, RIP Chris Farley.

I worked here as a manager between 1987 – 1993 It was never a triple screen, throughout the forum and talkies days, in 1993 screen 2 was sub let to laser quest and screen one was partitioned to make 2 smaller screens. The projection equipment was Phillips and worked with cake stand platters, screen 2 was replaced by a kayley machine after it died, this was shipped over from bentleys at burton latimer when Ashley closed it, Kettering Ohio cinema lasted until the odeon opened in the town but the lease by that time had been sold to Brian mcfarlane who ran the old place until the bitter end. Corby cinema through the 80’s and early 90’s had a great atmosphere, it was local and a cheap night out, 2 films for 2 quid, now that was a bargain.

Did it screen Jerry Lewis films?

Where in the UK was the other Jerry Lewis Cinema?