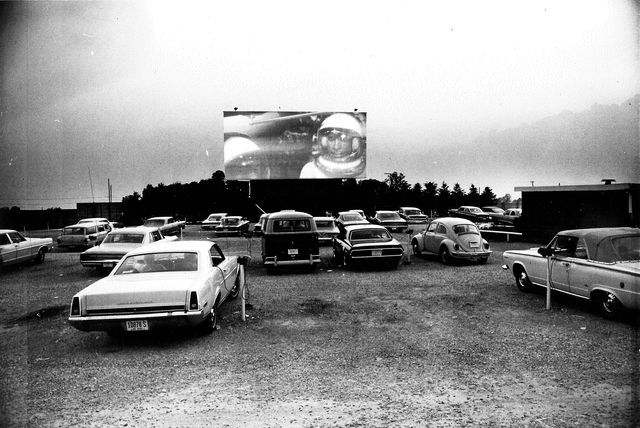 The Tiffin Drive-In opened on June 10, 1949 with Bud Abbott & Lou Costello in “Buck Privates” & Roy Rogers in “Under California Stars”. It was opened by Brinkman & Shults Inc. and H. Horsteimer. Howard Shults was a businessman who owned several businesses over the years. Charles R. Brinkman was from Defence, OH. Brinkman also opened the Defiance Drive-In in July of 1947. The Tiffin Drive-In parking ramp could park 500 cars. Ed Suffecool who helped Shults build the drive-in recalls “We put in a children’s playground in front of the screen. There was a merry-go-round, a big slide and a sand box. The teeter totter seemed like the children’s favourite. On any given night about 50 to 60 kids would be up there playing ‘til the show started. We also placed several benches for the parents to sit and watch their kids”.

Ed also shared some additional memories of the drive-in. “Howard and I had to go out and oil the ramps and driveways with used motor oil to keep the dust down. My girlfriend (now my wife) and I used to go to the Freemont Drive-In, Skyway Drive-In and Starlite Drive-In to estimate the number of people who attended different movies, to determine if we wanted to book them for the Tiffen Drive-In. The mid-week attendance would be approximately 25 per cent (125 cars). The concession stand had more income than the gate admission. We always had the place full on Fridays, Saturdays and Sundays”.

A root beer/ice cream stand was built in front of the screen tower but it was pretty much of an afterthought and it failed. It was added onto and rebuilt into a house later on. The old screen tower got twisted from a tornado in 1954, but it stayed up, and was still usable. In September of 1955, after the summer movie season was over, it was rebuilt and widened to 88 ft. for screening CinemaScope movies. In late-1955 or early-1956, the old concession stand was demolished and a new 50ft. x 70ft concession stand and projection booth was built. Two more parcels of land were acquired in 1956 for the drive-in, bringing the total to 10.59 acres.

To attract more families and patrons to the drive-in before the movies started, Shults opened up the Fun Farm on May 26, 1951. It featured animals, such as miniature horses, deer, Shetland ponies, sheep, prairie dogs, wild ducks, rabbits, African green monkeys and others for kids to enjoy. The star of the Fun Farm was ‘Little George’, a 2,000 pound Texas Longhorn steer. In 1963 a buffalo calf was added to the attractions. The Fun Farm also featured a miniature prairie schooner with matched teams of pony’s that travelled around the drive-in. The ride cost 10 cents. Shults had two miniature model T Ford cars that could be driven around the drive-in for 25 cents each. At the same time a gift shop was opened that was located in the Fun Farm.

The Field of Dreams Drive-In features first-run movies in a family-friendly environment. Free games such as putt-putt golf, corn hole and hillbilly golf are available for family enjoyment before the movies start.

Double features (two movies played one after the other on the same screen) are shown for one low price — which makes drive-in theaters an exceptional value.

Delicious food is available on-site including mouth-watering hamburgers, chili-cheese-fries and the best popcorn around! We even bake pizzas on-site and will deliver them to your vehicle at no extra charge – hot and delicious!

In Spring of 2019 it was renamed Tiffin Drive-In again and the neon sign was being restored.

I just want to say that you to Saunders Theatre Properties for taking over the Tiffin Drive Inn. Ever though I am a theatre manager for Carmike Cinemas in Findlay, Ohio I enjoy the opportunity to take a weekend and watch a movie like the olden days in a car. Keep up the good work and I will see you this summer of 2012.

The Tiffin Drive-in has been sold by Saunders Theater Properties.

According to a release from the Tiffin-Seneca Economic Partnership, freelance writer and entrepreneur Mike Cole recently purchased the theater and plans to improve it with a $200,000 investment.

Changes will include two new screens: an 84-foot-wide screen replacing the original and an additional permanent 44-foot-wide screen. They will be constructed by Selby Products of Richfield.

“We are excited to bring the Tiffin Drive-In Theater into the next era and help it to continue to be a unique attraction in Seneca County for many years to come,” Cole said.

Construction on the primary screen is expected to start in September and followed shortly after by the second screen which may not be operational during the 2020 season.

From the new owner..

The Drive-In has been a landmark in Tiffin for 71 years. Many residents both young and old remember loading up the car and heading down SR 53 to see a double feature and indulge in movie theater snacks. Generations of Tiffinites enjoyed movies from these screens but over time they have become unable to be repaired. The new owner Michael Cole saw the repairs needed and decided to make changes to the Drive-In to update them.

The 71-year-old screen #1 was retired as of October 1. It will be replaced with a new screen the same size as the old one. The new screen will come with a reflective paint to enhance the quality of movies on the screen.

The Drive-In’s new screen will be built by Jerry Selby, a Richfield Ohio native. Selby and his family have built drive-in screens all around the world for theaters. The new #1 screen will be unveiled by October 14 or 15. Cole plans on having a screen premiere event night and the new screen will be used regularly starting the weekend of October 16-18, if all according to plan.

A new screen #2 is set to be built by Selby. This new screen will stand in the grassy area of the northeast corner. However, the screen will not show movies until the next season as there will be new equipment added and moved.