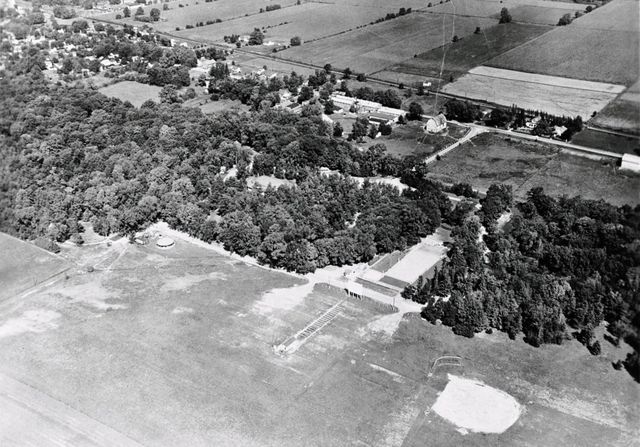 Meadowbrook Park in Bascom, Ohio, opened in the 1890’s as stopping point for the Tiffin, Fostoria and Eastern Railway interurban that ran between Tiffin and Fostoria, Ohio. After an ownership change in the 1920’s, more improvements were made to the park. A grand opening was held in 1931 which featured a ballroom, swimming pool, baseball diamonds, cottages, tennis courts. Amusement park rides were added to the park at a later time.

In 1936 outdoor movies were added and it became a drive-in theater. This new addition included benches where people could sit and watch the movies that were located in front of the projection booth. One large set of speakers provided the sound for everyone’s enjoyment. In 1959 the screen was enlarged for CinemaScope and car speakers were installed. During the late-1950’s and early-1960’s, movies in Spanish were featured during the week. In the late-1960’s showing movies became more sporadic when Meadowbrook Park and the ride concessions could not pay for the increased liability insurance. This extra strain forced them to leave the movie business.

After the township took the park over in 1972, it began to change by adding a family campground. This park was eventually transformed from an amusement park/drive-in theater to a family oriented campground and community park. It remains this type of facility to this day.

I uploaded some new pictures of the amusement park rides at Meadowbrook from the mid 1950’s. Pictures are courtesy of Nancy and Paul Coffman…Tiffin, Ohio.