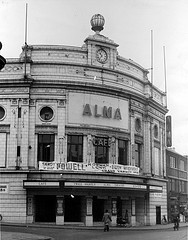 Located on the corner of Alma Street and New Bedford Road. The Alma Kinema was opened on 21st December 1929 with Corrine Griffith in “Divine Lady”. Designed by noted cinema architect George Coles for cine/variety use. Seating was provided in stalls and circle levels. The proscenium was 38 feet wide, and the stage 23 feet deep, with six dressing rooms. On 5th May 1930, a Compton 2Manual/6Ranks organ was installed and opened by organist Herbert A. Dowson. The building also contained a cafe and a dance hall.

In 1934, the Compton organ was altered by adding a third coupler manual, and a phantom piano, with the organ console gaining an illuminated surround, and a lift, so it could rise from the orchestra pit. The Alma Kinema was taken over by the Union Cinemas chain from 24th February 1936, and they were taken over by the Associated British Cinemas(ABC) chain from October 1937. Some live shows were staged from October 1943.

ABC closed the Alma Cinema on 28th March 1948. It then was re-named Alma Theatre and went over to live theatre performances presenting plays, high class variety shows, musicals and opera. Films were re-introduced in July 1954, but this use was short lived, and it was altered to become the Cresta Ballroom.

The building was demolished in July 1960, and an office block named Cresta House was built on the site.