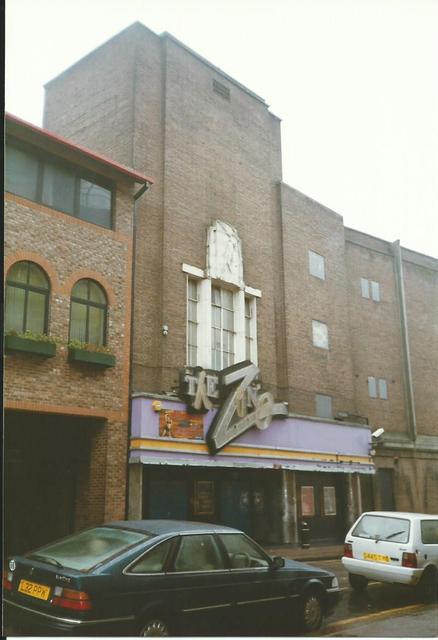 In a road one street away from the town centre was the luxurious Union Cinema - opened by Union Cinemas Ltd. and designed by Leslie H. Kemp.

The Union Cinema opened with Robert Douglas in “Our Fighting Navy” on 11th October 1937, just 3 days before the entire Union Circuit was acquired by Associated British Cinemas(ABC) on the 14th. Presumably the plans for ABC’s own cinema in Luton, the Savoy Cinema, were too advanced as the 2nd ABC controlled large super-cinema opened almost exactly one year later. Perhaps ABC just wanted a theatre with a better location. The Union Cinema was equipped with a Wurlitzer 3Manual/8Rank organ which was opened by Robinson Cleaver. The organ console had a ‘pillar & vase’ illuminated surround.

The Union Cinema, was renamed Ritz Cinema in July 1949, then played a secondary role with the Savoy Cinema taking the pick of the new releases - even though the Ritz Cinema was larger by some 200 seats. There were also two other Luton cinemas in Union control which became part of the ABC circuit - the Alma Theatre (a 1,664 seat theatre with many live shows - closed 1948) and the Empire Cinema (900 seats which was quickly closed in 1938).

The Ritz Cinema continued until the Savoy Cinema (by now renamed ABC) was tripled in 1971. It was converted into a bingo club, retaining the Wurlitzer organ. It later became a discotheque, and in 1999, the building was completely gutted for a major refurbishment of the nightclub named Chicago’s. Other nightclubs opened within the building which were named Liquid & Envy. They were closed in May 2015. There were plans proposed to demolish the building an build 91 flats, but those plans were refused permission. An amended plan for 51 flats and the retention of the façade were approved and demolition began in April 2019 and was completed in November 2019, with only the façade being save as a entrance to the flats.

Exterior photo of the Ritz here:–

Vintage photographs of the Ritz Cinema (when in use as a bingo club in the 1970’s), and its Wurlitzer organ console:
http://www.ukwurlitzer.co.cc/2210.html

This was the first cinema that I saw 70mm in! Half A Sixpence, 2001 A Space Odyssey, Ice Station Zebra, Ben Hur (1969 reissue) and Where Eagles Dare were all shown here in 70mm with Six Track Stereo. Even as recently as a year or two ago I dreamed it had reopened and was so happy in the dream! So clearly my subconscious holds it in high regard. I also saw The Mask aka Eyes Of Hell there in anaglyph 3D (my first X movie in a double bill with Roger Corman’s The Haunted Palace).

This was one of the many cinemas used for pop package shows in the 1960’s, and notorious as the site of one of P.J.Proby’s on stage trouser splitting incidents, which led to him being banned from all ABC theatres!