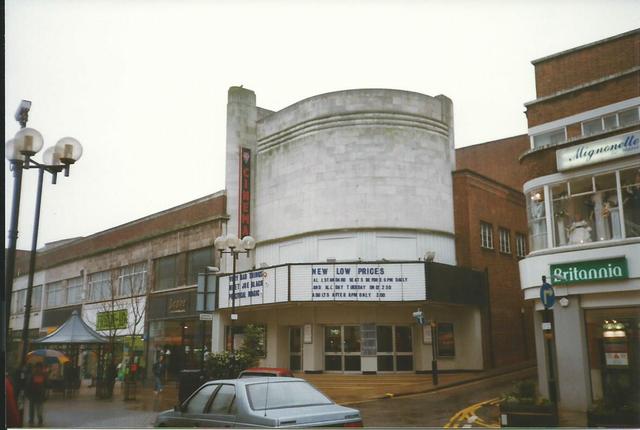 The 1,892 seat Savoy Cinema opened at the corner of George Street (a main town centre thoroughfare) and George Street West on 17th October 1938. It was designed by Associated British Cinemas(ABC) in-house architect William R. Glen and immediately assumed the leading position in the ABC cinemas in town (the Empire Cinema closed two days earlier, but the Alma Cinema and Union Cinema continued for many years).

It was renamed Cannon in April 1986. When a new 10-screen Cineworld multiplex opened just a short walk down the street in 1998, the Cannon was renamed ABC once again and continued for another two years, finally closing in November 2000. It has lain empty since, despite several plans to establish an arts centre / theatre in the building.

I have fond memories of many visits to the ABC Savoy (as it was known when I was a child). In the 1960’s it was one of two ABC Cinemas in Luton – the other was the ABC Ritz in Gordon Street. I think the tripling was significant because it was one of the first (?) and unlike later subdivisions the building was gutted and three distinct auditoria were created (not like the “cheaper” and more common practice of dropping a wall from the front of the circle and making two auditoria out of the space underaneath as in the Odeon at Luton and many other locations!). Architecturally the three auditoria were pretty much featureless. At the time of opening as a triple, Screen 2 had 70mm facilities. Screen 1 was upgraded to Dolby Stereo in 1984.

Exterior photo of the ABC here :–

At least it got rebranded back to an ABC prior to closure. Professional until the end, the showmanship was great, as were all the friendly staff. I travelled down from Daventry to go here, as all there were in Northampton or Rugby nearby are soul-less multiplexes. A sad loss for Luton this closure.