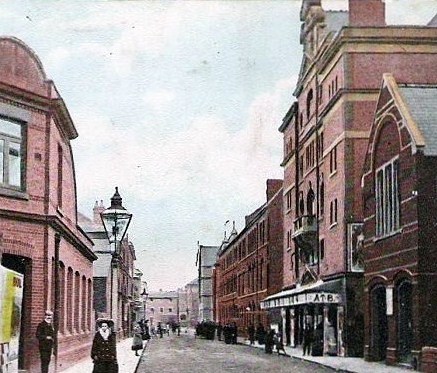 Located in the centre of Luton, Bedfordshire on Waller Street, which today no longer exists as the area has been replaced by the Arndale Shopping Centre (since 2006 known as The Mall).

Built adjacent to the swimming baths of 1872, the Grand Theatre was opened on 10th December 1898 with a performance by Lily Langtree. It was designed by London based architect Charles Herbert Shoppee, and had a brick, stone and terracotta facade.

In the early-1900’s films were being presented as part of the programme. During World War I (1914-1918) it presented live performances and films, and this policy lasted after the end of the war. The last film to be screened was “Simba” in 1930, after which it was a live theatre only.

It was closed in 1937 for extensive alterations, and re-opened on 4th December 1937 with a stage production of “The Desert Song”. In 1946, it was taken over by the Falcon Players as a repertory theatre, and was offering plays by Shakespeare in 1949.