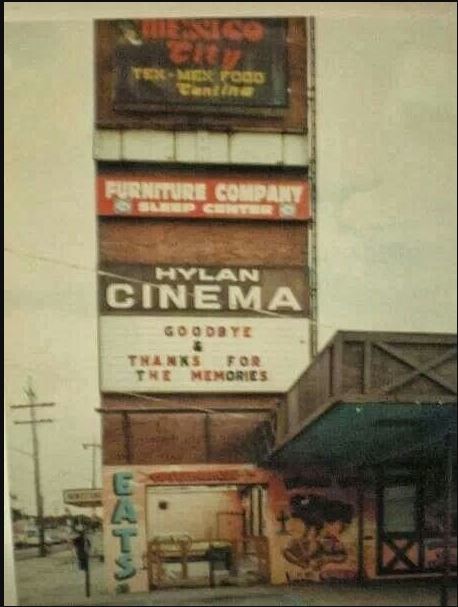 The 920-seat Hylan Cinema was located in the New Dorp Beach district of Staten Island. Operated by Kendrew Theatres based in Manhattan, it was opened as a single screen on January 22, 1971 with Richard Benjamin in “Diary of a Mad Housewife”. It was later twinned and then converted into 4-screens. It closed on August 17, 1994.

this theatre is being mistaken for the former fox plaza theatre.the hylan cinema,originally one screen and later twinned, was located on hylan blvd just south of new dorp lane. annie sez and applebee’s now stand at the location. the ua hylan plaza is the renovated site of the former fox plaza, in the k mart shopping plaza.

the theatre no longer stands,but when it did it was not on the 5200 block of hylan blvd.that would put it at the southern tip of the island. it was more like the 2500 block,between new dorp lane and rose avenue.

It closed in 1992 or 93 when the crappy strip mall it was in was sold to developers and torn down.

I miss this theater. In my teens, I went to all the New Dorp theaters and the New Springville ones only occasionally (except for Rock Horror in the mid-80s).
I remember, after the movie, I would go hang out in the pool hall down the end of the strip.

saw Amityville Horror here as a very little kid with my older brothers and sisters and their friends…..big mistake! Came out crying and scared sh,,t. Ghostbusters in high school. I remember the pool hall and going to pizza town.

I saw “Midnight Express” here, back in 1978. That was a mistake, too. I was with my high school friend, and we were about 10 minutes late for the movie. When the movie was over, I found that some pinhead had thrown a bottle of Yago Sangria at my car, smashing the windshield. I never did have the car fixed, and I didn’t catch up with the first 10 minutes until “Midnight Express” was run on TV about two years later.

Saw “The Andromeda Strain”, “The Anderson Tapes” & “Indiana Jones and the Temple Of Doom” there. When I saw Andromeda Strain the manager had to announce to the people om line that the reels of the film were on a truck speeding down Hylan Boulevard. After about 10 minutes the truck had to go all the way to Ebbits Street to find somewhere to make a U turn. Arriving at the Hylan the projectionist and the manager grabbed the metal reel boxes, ran to the projection booth threaded the projectors and started the movie only 5 minutes late.