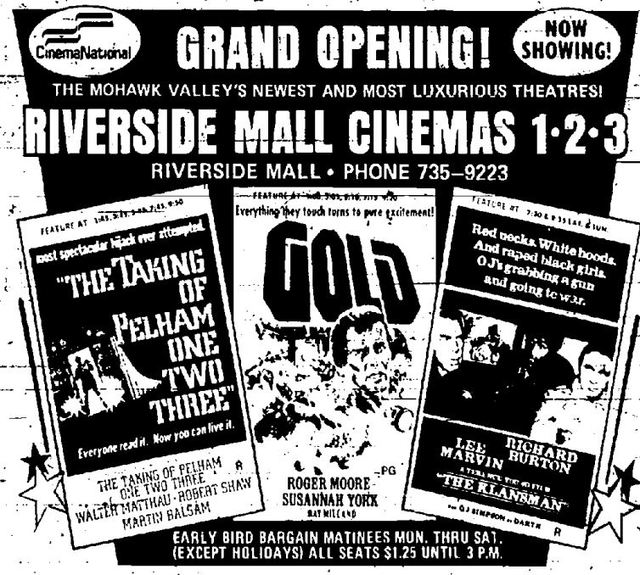 The Riverside Mall Cinemas 1-2-3 was opened by Cinema National on November 29, 1974. Later operated by Hoyts, it was a part of the Riverside Mall, located right close to the Wal-Mart off of Route 12. The mall had closed in the mid-1990’s with parts of the mall torn down. You can actually see a little bit of the mall that is connected behind one of the department stores. Several department stores occupy the spot with the cinema now unconnected.

The Riverside Cinemas (Hoyts) continued to run it’s movies, but closed in the mid-2000’s. Currently, it sits vacant.

Riverside cinemas closed in April 2005. Shortly after(sometime between closing and when I was there in 08), because of the lack of heat in the building a pipe froze and burst, in turn filling the bulding with water until it started flowing out of the back door and someone noticed.

When I went in there in 2008, there was mold covering the majority of the carpeted walls. All the seats and projectors had been removed but most of the snack bar still remained.

This past summer (2012) I was driving through and noticed there were some constuction workers at the entrance. So I parked and went over to chat.. The guys told me that someone from NYC had purchased the building and wanted it gutted and thats all they knew. They kindly let me in to see, and it was really odd seeing the entire building opened up all the way to the roof.

I beleive the location of the original 3 cinemas was NOT where the “8” were, I think they were on the backside of the mall closer to where “BJs” is… Can anyone confirm this? Had to be in the mid to late 80’s that it changed.

I had a blast seeing Election here with some friends back in the spring of 1999 but didn’t get to the Riverside much. It had intense competition from the Sangertown Square 9 in New Hartford. That said, the place had that great rundown 80’s charm and the concessions were cheap. Wish I could remember more of what I saw there.

I always cared for Riverside over Sangertown, the seats were better and they had cup holders. Plus Riverside mall was just better overall in my opinion, it had a nicer layout than Sangertown.

I worked there from 1982 till I graduated from college in 1993. It was Cinema National in 1982 and was Hoyts when I left. I miss this place every day of my life..Old Cinemas Rule!!