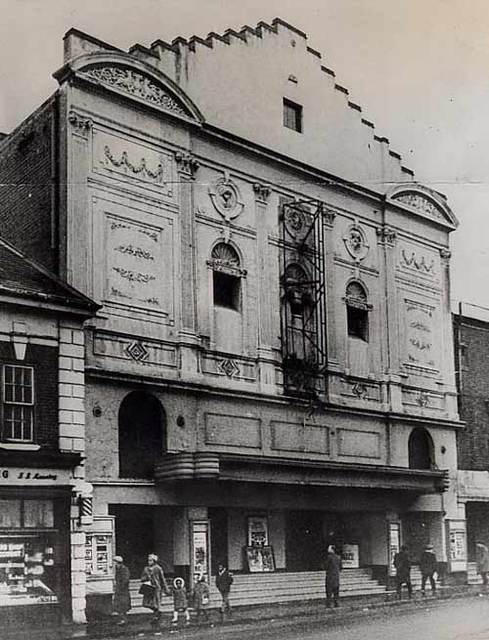 Located in Wolverhampton city centre. The building was originally a slaughterhouse. It was converted into a concert hall named the Prince of Wales in 1863, with a capacity of 2,000. On 26th December 1885, it was re-named Star Theatre. In 1902, it was the Prince of Wales Theatre, then after some rebuilding in 1904, it was re-named Hippodrome Theatre presenting circus acts. It was damaged by fire in 1905. It re-opened after repairs on 14th April 1906, presenting variety and melodrama. Seating was provided in orchestra stalls, dress circle and upper circle levels. The Hippodrome Theatre was now owned by Walter De Freece. In 1908, it was re-named Theatre Royal following the demolition of the towns' old Theatre Royal.

Following another fire in 1913, it was rebuilt in 1914 to the plans of Wolverhampton based architect H. Marcus Brown. It was taken over by Leon Salberg in December 1928. It presented it last play “Paddy, the Next Best Thing” on 30th May 1931. It was equipped for sound pictures, and re-named New Theatre Royal. Alterations had been carried out by the architectural firm Satchwell & Roberts, including constructing a projection box at the rear of the upper circle. It re-opened as a cinema on 15th June 1931 with Edward G. Robinson in “The Widow From Chicago”. The New Theatre Royal was leased to the Associated British Cinemas(ABC) chain in 1932 and they operated the cinema during the period until 1938 when they were building their new Savoy Cinema across the street.

The New Theatre Royal was then taken back by Leon Salberg and Sydney Clift and became part of the Clifton Cinemas chain. It was re-named Clifton Cinema in 1948. In 1953, it became the first cinema in Wolverhampton to be equipped with CinemaScope and 4 track stereophonic sound, when a deal was struck with 20th Century Fox. It was sold to the Leeds based Star Cinemas chain in February 1966, and the closed it on 12th February 1966 with Brian Donlevy in “Curse of the Fly” and Marilyn Hanold in “Duel of the Space Monsters” being the final advertised programme.

It re-opened as a Star Bingo Club on 3rd March 1966. In 1978, the building was declared unsafe, and was closed. It was demolished in early-1981, and a new Wolverhampton Central Police Station has been built on the site.