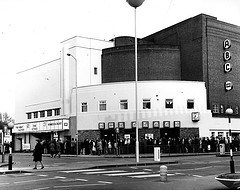 Located in the centre of Wolverhampton on the corner of Garrick Street and Bilston Street, with its entrance on Bilston Street opposite the Clifton Cinema. The site had previously been occupied by the Theatre Royal.

The Savoy Cinema was opened by the Associated British Cinemas(ABC) chain on 20th December 1937 with Charles Rogers in “Let’s Make A Night Of It” and Lew Ayres in “Last Train From Madrid”. It was designed by ABC’s ‘in-house’ architect W.R. Glen. Seating was provided for 1,777, with 1,155 in the stalls and 622 in the circle. The cinema had a cafe for the convenience of its patrons.

Taken over by the Cannon Group and re-named Cannon in November 1986. The Cannon was closed on 17th October 1991 with Tim Robbins in “Jacobs' Ladder” in screen 1, Kevin Costner in “Robin Hood, Prince of Thieves” in screen 2. and Steven Seagal in “Out For Justice” in screen 3. The building was demolished in December 1995. Since September 2006, a nightclub named ‘Oceana’ operates from a building on the site. That building was demolished in June/July, 2019.

A photo of the Cannon shortly before demolition here

The actual building still remains. Only the face of the building was altered so it no longer has it’s Art Deco features. Such a shame really

The Cinema is currently being demolished. 29.6.19

The site has now been totally cleared and a new educational building will be used on the land. I saw my first Cinema film here and then started as a trainee projectionist under the Chief Dave Tambling. Such fantastic years.

I was offered the Manager’s post at this theatre by Lionel Johnson in 1982. At the time I was at a certain ‘Hell Hole’ of a venue in the North West (I refrain from naming it) but I declined the Wolverhampton offer stating that I would prefer to return to my native North East and thus I instead took over at Newcastle upon Tyne.

One of my former Managers , John McIntosh had relieved at Wolverhampton whilst his own theatre, the ABC Ritz Wigan was being subdivided and he told me that the people of Wolverhampton were very friendly.

I have to add that , cheapened as the ABC Circuit had become by this time, the worst was yet to come four years later when that bunch of spivs, Cannon took over. In Newcastle, the change in attitude at the Odeon was palpable. I wonder if a similar situation prevailed in Wolverhampton….