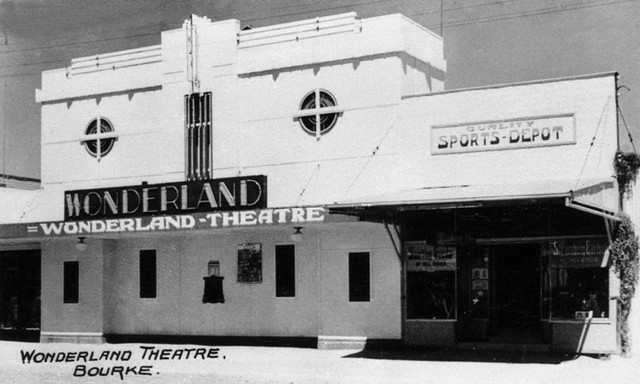 The cinema, Randall’s ‘Wonderland’, was opened in 1927 by Arthur and brother Thomas Randall. In 1933 Sylvia Randall took over the running of the picture show and in 1935 it was rebuilt and modernised with a new Art Deco style front designed by architects Guy Crick and Bruce Furse. A Building Journal in 1936 remarked that standard fibro (asbestos sheet) sections had been manipulated by the architects to create a ‘front of simple charm and character at a total cost for materials of about 28 pounds’ (about $60).

The ‘Wonderland’ first showed talkies on 7th February 1930, when deck chair seats in the open air cost about a quarter. In those days the Fitzgeralds Hotel next door was not the best of neighbours, with turkeys and hotel washing in the back yard adjacent. Sylvia Randall’s son Rod was apprenticed at Hoyts Theatres, returning to run the theatre from 1950. The theatre ran two picture shows one indoor and one in the open air. In 1954 a fire next door broke out, and spread to the theatre which damaged the projection room, the facade to the rear of the auditorium and the wunderlich ceiling. The ceiling was replaced with a soft board that has since warped and proved unsatsfactory, and a new box room was also then built in the ceiling.

The picture hall closed in 1982, with the last picture shown being “Star Wars”, and the building was then incorporated into a furniture business. An example of the pictures in 1952 from an advertisement in the Western Herald of May 23rd includes: “Quicksand” featuring Mickey Rooney. “Good Humor Man”, “Woman on the Run”, “Pirates of the High Seas”, “Fathers Little Dividend”, “Song of the Thin Man”, “Madeleine” and “Untamed Fury”.