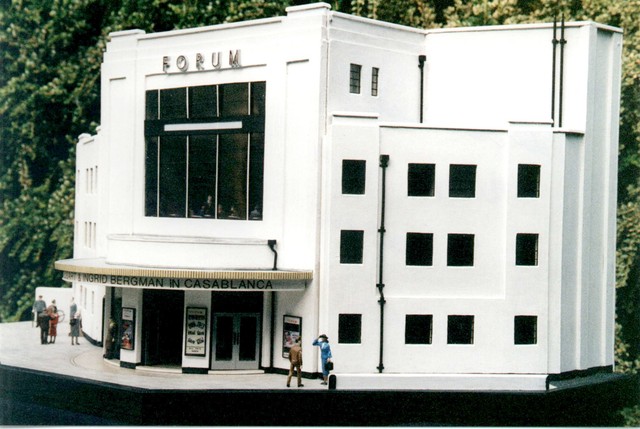 Located at the corner of Walsgrave Road & Longfellow Road in the Stoke neighbourhood of Coventry. The Forum Cinema was opened on 1st November 1934 with Richard Tauber in “Blossom Time”, and with popular film star Gene Gerard appearing ‘in person’. It was a large suburban ‘super’ cinema, built by the local Philpot circuit, and was designed by their ‘in-house’ architect T.D. Griffiths.

Seating was provided in stalls and circle levels. It was an extremely wide cinema, and the proscenium was 45 feet wide. It was equipped with a Conacher 3Manual/8Ranks organ, which had a console that was designed by noted organist Reginald Foort, who also opened the instrument. The organ also controlled a phantom grand piano on the stage. The projection box was equipped with Kalee 11 projectors and there was a Western Electric sound system.

The Forum Cinema was closed on 14th November 1940 when power was lost during heavy German bombing raids on the city, but it was not damaged. The electric power supply was restored in the first week of December 1940 and the cinema re-opened with Jack Benny in “Buck Benny Rides Again”. Organist Clifford H. Baylis became resident organist after the end of World War II.

The exterior of the building was resurfaced in around 1957, but the interior remained untouched. Still operated by the Philpot circuit, the Forum Cinema was closed on 26th May 1962 with Doris Day in “Lover Come Back”. The Conacher organ was sold to Northampton Grammar School (today Northampton School for Boys) where it was regularly played. It has since been put into storage and in 2020 is being refurbished in Melton Mowbray.

The Forum Cinema was immediately demolished, with demolition completed in August 1962. The Forum Bowl and some shops were built on the site. In the mid-2000’s the bowling alley was closed and the space is used by a church.

The Conacher organ was sold from the school around 2006 and today seems to be in the hands of a Kent-based organ builder. There is a possibility it may be re-installed in a church, but whether or not it will be complete is unknown.

The Forum’s Conacher organ didn’t have an illuminated surround. The console had a wooden surround shaped like an illuminated surround (very art deco with pleasing curves, similar to those manufactured by F. H. Pride) and painted white so as to reflect coloured spotlights playing on it. Real illuminated surrounds reputedly cost about as much as the organ itself, so I guess the circuit’s budget wouldn’t stretch as far as that. When the school bought the organ, this surround was scrapped, as it was reportedly riddled with woodworm.

The surround was left in the cinema as the decision was made to restyle the console to match its new surroundings. A mahogany laminated blockboard was used and the original, as I recollect cream and green coloured, was cut up and used in the school woodwork department. On one occasion I discovered the section which covered the relays above the pedalboard, in the woodstore, cut in half, so I cleaned it up and re-united it with the console. When the school bought the organ, for £100, the installation team was allowed a further £100 to complete the job, so it was all done on a shoestring.

The group which went on to buy the Wellingborough Compton for Bilston Town Hall, had hoped to buy the Conacher. I think I am right in saying that the school accepted an offer for £350 from the people who took it to Kent where, it seems, it is in the hands of an organ builder. Having spent a few years caring for this temperamental beast, I hope it remains intact when re-installation eventually occurs. Unfortunately, a number of theatre organs have been shorn of their traps and percussions when ‘taking the cloth’!

I have recently been in contact with the new owners of the Conacher and have been told it is their intention to locate a suitable venue (Not an easy thing to do) and re-install the organ in as close to original condition as possible. Given that I spent a lot of time with it many years ago, i think this is fantastic news and I wish them every success.

A souvenir programme dated 1st Nov, 1934 is held by the Kent MOMI Museum, Deal Kent. Gene Gerard is mentioned as stated above.

The Conacher has now been purchased from storage in Kent and is in the hands of a small group East Midlands Cinema Organ Association, formed to support the restoration and maintenance of the instrument. The owner, Carl Heslop, is a professional organ builder and I am Secretary of the group. The organ is now based at the ‘New Forum’ our centre in Melton Mowbray. It is our intention to restore it to original condition but also to enable it to replicate one of the long-gone 22 Rank Conachers. We have already obtained pipework from the Conachers of the Ritz, Nottingham, Regal, Southampton, Regal, Hull and Regal, Wimbledon. Installation of a computer-based control system makes this possible. The console suffered significant water damage whilst stored in Kent and has had to be extensively re-built. However, the good news is that this survivor of a rare marque will once again be heard.