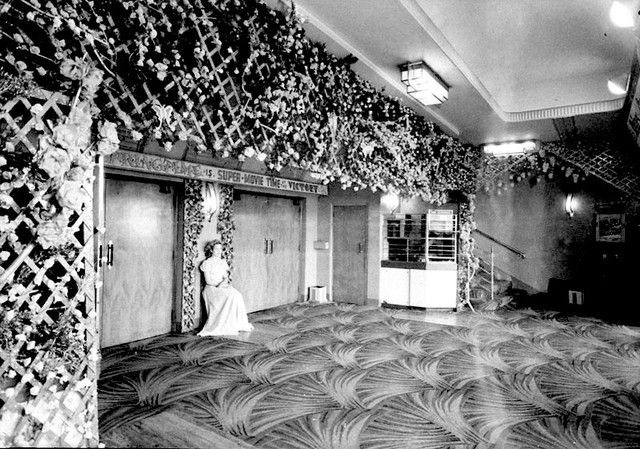 It was demolished in 1939, replaced by a Streamline Moderne style design cinema by architectural firm Crick and Furse, which was named Victory Theatre. The opening program was a double bill of Leslie Howard in “Pygmalion” and Niall MacGinnis in “The Edge Of The World”. For most it its life the Victory Theatre showed action movies. Along with the Capitol Theatre it was Greater Union Theatre’s main outlet for Columbia and Paramount B’s. In 1956 Bill Haley in “Rock Around The Clock” ran for 12 weeks, the only long run ever at the Victory Theatre.

As the Rapallo Theatre it showed classier films but was marked for demolition when Greater Union Theatres decided to built a multi-screen complex next to the huge Hoyts complex (today operating as the Greater Union Event Theatres). The National Trust objected, trying to save the last remaining Streamline Moderne style theatre in the city centre, basically unchanged since 1938.

The Rapallo Theatre and adjacent Paramount Theatre were both demolished in 1984.

The lane at photo left of the Victory is Albion Place, should the map be adjusted

the person who told me Rock Around The Clock ran for a year has backed off, saying well it seemed like a year. The film actually ran for 12 weeks, on a double bill with Five Against The House.

Actually the Rapallo was built on the site of Colonial No 1. Colonial No 2 was demolished for the construction of the Plaza Theatre, across the road.

This post from Cezar Del Valle’s Bijou Dream weblog is also a bit confused. The heading gives the address of the Colonial No. 2, at 525 George Street, but I believe that the photo on the page actually depicts the Colonial No. 1, and on the bottom of that photo it says “Australia’s first continuous moving picture show” and then “J. D. Williams Ams. Co., 610 George St. Sydney.”

610 George Street would be under the footprint of the Plaza Theatre. The Colonial No. 1 was an existing theater that J. D. Williams acquired in 1910, and which he then remodeled. The MPW photo must depict the house pre-remodel. The entrance is wider and the decorative details are different in CharmaineZoe’s drawing, so it must be a post-remodel view.

There are also numerous color photos of the Victory/Rapallo by the author. Despite numerous Art Deco features, especially on the facade, the Victory was a very streamlined theater. Its interior could serve as a textbook example of the transition from Art Deco to Streamline Modern that took place through the 1930s.

Opened as the Empress with “Into the jungle” and “a romance of the border”.