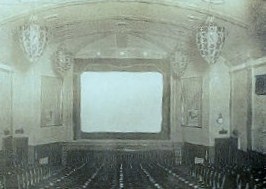 Located in the Greengates district of Bradford on the north side of New Line near the junction of Harrogate Road. The Greengates Cinema was designed by Charles Sydney Hiley, who became a director of the Greengates Cinema Co. Ltd. who built the cinema. It was opened on 4th October 1928 with Marceline Day in “Restless Youth” and Eugene O'Brien in “The Romantic Age”. All seating was on a single sloping floor, and the proscenium was 22 feet wide. It was equipped with a 2Manual Fitton & Haley organ.

The Greengates Cinema was closed on 4th April 1959 with Betty Hutton in “Annie Get Your Gun” and Laurel & Hardy in “Nothing but Trouble”. The building stood empty for several years. The organ was removed from the building for spares, and the console was burnt by contractors. A new frontage was built, and the auditorium floor leveled. It opened as a supermarket around 1967, later taken over by the Co-Op and today is a Netto supermarket. A false ceiling now hides the original cinema ceiling.