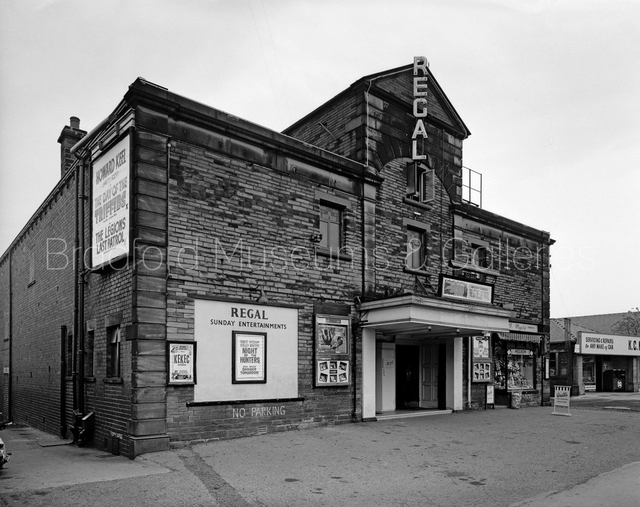 Located in the Eccleshill district of Bradford at the Five Lane Ends end of Norman Road. The Palladium Cinema was opened on 7th January 1929 with Hobart Bosworth in “Blood Ship” and Hugh Trevor in “Her Summer Hero”. Seating was provided for 1,000 in stalls and circle levels.

In 1931 it was taken over by Modern Theatres and was re-name Regal Cinema, with the seating capacity reduced to 900.

It was later taken over by the Leeds based Star Cinema chain and was closed on 12th October 1958 for modernisation. A new 35 feet wide proscenium was installed, which contained a CinemaScope screen. The seating capacity was reduced to 882. The Regal Cinema was re-opened on 27th October 1958 with Dirk Bogarde in “The Wind Cannot Read”.

The Regal Cinema was closed on 23rd November 1966 with Peter Cushing in “Hound of the Baskervilles” and Leo Genn in “Steel Bayonet”. It was converted into a bingo club, which operated until 1988.

The former stalls floor was leveled and became a snooker club, with the former circle unused and sealed off by a false ceiling. In 1998, a new floor level was constructed at circle level, and this upper portion became a gym & fitness centre, retaining the original plaster decoration on the curved ceiling. In 2008, the snooker club closed and this area was taken over by the gymnasium in 2009.