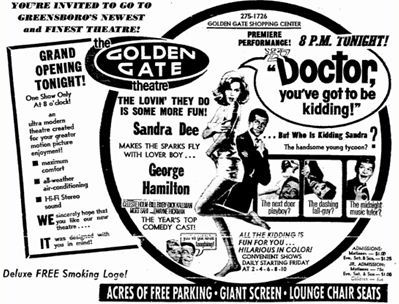 Located in the Golden Gate Shopping Centre. Opening on April 24,1967,the Golden Gate Theatre was the second newest moviehouse in Greensboro. Owned and operated under Charlotte-based Stewart and Everett Theatres, the Golden Gate Theatre first opened as a huge 788 seat single screen theatre, originally seating 738 on the main floor with an additional 50 seats for it’s smoking loges. It’s giant widescreen was equipped to showcase 35mm or 70mm films with a modern 4-track stereo sound system for your listening pleasure. The opening attraction for it’s April 24, 1967 premiere was the George Hamilton feature “Doctor, You’ve Got To Be Kidding” with Sandra Dee.

The Golden Gate Theatre remained a single screen theatre until mid-1975 when the auditorium was split down the middle, creating two shoebox size auditoriums with smaller screens. By the time Carmike Cinemas took over the operations of the Golden Gate in 1986, the theatre was still doing good business by showing a variety of films. It remained that way until it’s closing in February 1987.