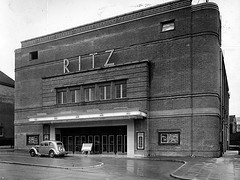 Located in the East Sussex town of Bexhill-on-Sea. In 1910, a skating rink was built on this site. It was demolished and the Union Cinemas chain built the Ritz Cinema, which opened on 18th January 1937. It originally had a large sky sign mounted on the roof. Union Cinemas were taken over by the Associated British Cinemas(ABC) chain in October 1937.

ABC closed the Ritz Cinema on 2nd December 1961, and it was converted into a bingo club, which closed in 1962. The building then stood empty until it was demolished in 1968. A telephone exchange was built on the site.