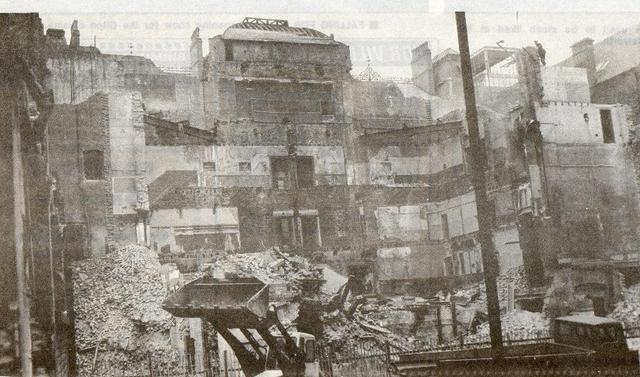 Located in Birmingham city centre on Old Square, Corporation Street. The Grand Theatre was opened on 14th November 1883 with a programme that included “Ici on parle Francais”, “Good as Gold” and a musical “At the Seaside”. Designed by Birmigham architect W.H. Ward, it had seating provided in orchestra stalls, dress circle, upper circle and gallery, with 8 boxes. The Grand Theatre was owned and managed by Andrew Melville, and presented plays, opera and musicals.

It was taken over by the Moss Empires chain in 1907, and they employed noted theatre architect Frank Matcham to make alterations to the interior. It re-opened as the Grand Theatre of Varieties on 9th December 1907. It had a 33 feet wide proscenium, and a 36 feet deep stage

In 1930, it was equipped for ‘talkies’ and was converted into a full time cinema. Opening on 1st September 1930 with Lew Ayers in “All Quiet on the Western Front”, it had been leased to Universal Pictures Ltd. It closed as a cinema on 13th May 1933.

The building stood empty for several years and was eventually converted into the Grand Casino Ballroom, operated by Mecca Dancing. The ballroom was closed on 31st December 1960, and the building was demolished in 1963.