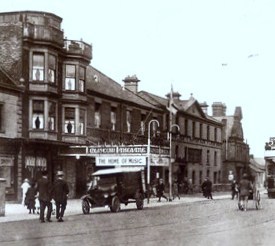 Located in the centre of Whitley Bay, Tyne & Wear. The Coliseum Theatre was opened on 14th May 1910. In May 1912 it became the Coliseum Grand Cinema. It was taken over by the military during World War I. It was extensively altered in 1919, reopening as the New Coliseum Cinema on 16th February 1920. It was taken over by the Associated British Cinemas(ABC) chain on 23rd December 1929 and they made further alterations to the building.

It was briefly taken over by an independent operator from 22nd November 1970, until it finally closed as a cinema on 1st May 1971. It became an independent bingo club.

Plans were passed in 2004 for the auditorium to be demolished, and offices and a library were built on the site. The facade and front of the building was retained and is in retail use.

Doctor Zhivago was of course in Panavision not Cinemascope. One Wide screen film that was very poular here was Zulu, which was shown several times. The last time that I saw it at the New Coliseum, the opening scene following the titles, which features bare-breasted Zulu women performing a dance, was missing. Were there objections to this scene, or could someone have removed it for their personal collection? Curiously, despite this scene, and the violence in some other scenes, it was still given a U certificate.

Following the demolition of the auditorium, a new customer service centre for North Tyneside Council, including a new library for the town, has been constructed on the site.

I used to go to the ABC Minors matinees held every Saturday at the Coliseum during 1948/49.

I also used to go to ABC Minors at this cinema, I can remember how, no matter what the running time of the feature was (mainly westerns) they were always over by midday, if there was any love interest scenes towards the end of a reel an early changeover seemed to happen. When scope was added right at the front of the stage the sides of the proscenium were cut back for extra width, the tabs were mainly black and hand wound and the screen was flat not curved with the top masking fixed resulting in a very cropped wide screen picture.

I can recall visiting this cinema in 1970 to see “Where Eagles Dare” does anyone know for sure the exact date this was shown..

I was the Assistant to Norman Cully at the ABC Sunderland many decades ago and he had managed the Coliseum for a lengthy period prior to his Sunderland appointment. He told me some very amusing stories about the place and the characters who met up in ‘The Victoria’ next door.

Re the Coliseum: Norman always said that the best part of it was the foyer and , having once had a ‘peep’ inside the place when it had gone over to Bingo, I would be inclined to agree as the ‘Scope screen must have been a real 'Letterbox’ affair. In stark contrast , another Coliseum cinema (Glasgow) owned and operated by ABC was, after Cinerama conversion, to boast (at 90 feet) the widest screen in the UK.

The Assistant Manager of the Coliseum, Cathy Taylor,long before the Coliseum’s closure, transferred to the Haymarket Newcastle where I got to know her very well. She and Norman remained good friends throughout her lifetime.

One of the Coliseum’s projectionists, Fred Norris, also transferred to the Haymarket (at around the same time as Miss Taylor) where he became ‘Second’ to Chief, Arthur White and upon whose retirement Fred succeeded him. He later transferred to the ABC Westgate Road (former Essoldo) where he was my Chief for a number of years. I was recently informed that he had sadly passed away on Christmas Eve 2019.

Looking at the photos of this cinema, I realise that there is a query over the one dated 1927. In Frank Manders' book on North Tyneside Cinemas, there is a photo reproduced which is captioned as dating from the opening of the New Coliseum, which was 1920. However while that matches the present appearance of the façade fairly well, it does not match the appearance in the 1927 photo, which more closely resembles it’s earlier appearance as a theatre. This raises the question as to when the white façade was added. I had assumed that it was from the 1920 reconstruction, but it must have been added later. Did ABC when they took it over modernise it’s appearance? Or had it been done earlier? It would be interesting to know more about this.

The one person who may have been able to answer, Norman Cully, is no longer with us but I am guessing , going by the style of the facade (Ionic pilasters etc), that it would indeed date back to 1919 when the building was modified as a silent cinema.

I am thus inclined therefore to ‘stick my head above the parapet’ and assume that the date on the aeriel view shot is incorrect as in 1929, when ABC acquired the place, Art Deco was becoming all the rage and much more modern looking than the architectural style of the – admittedly impressive – Coliseum FOH.

Norman said that the building would have had severe limitations even as a theatre, for whilst the stage depth was considerable, there was no fly tower (once again the Essoldo had the advantage). However, it had been an important concert venue, he told me, and the likes of Billy Ternent and his Orchestra made frequent appearances there during WW2.

The suggestion by Terry that the date of the 1927 photo is incorrect was also my first thought, however the problem with that is that Belvedere House is visible on the photo and that is believed to date from 1926 – the date is cut into the stonework. In an attempt to resolve this, I have been looking at old trade directories and the local newspaper, but without really resolving the issue, although the trade directories do suggest that Belvedere House is actually earlier than 1926. I have, however been able to find out a bit more about the history of the Coliseum. It was opened on 14 May 1910 as a theatre, but at some time, possibly May 1912, it became the Coliseum Grand Cinema. In those early days, the entrance was in the Royal Arcade, (a somewhat pretentious name for what was really a passage running between Whitley Road and neighbouring York Road) however in June 1913, a new more spacious entrance foyer was opened at 250 Whitley Road which had previously been a shop. It was commandeered by the military during the war and reopened as the New Coliseum on 16 February 1920.