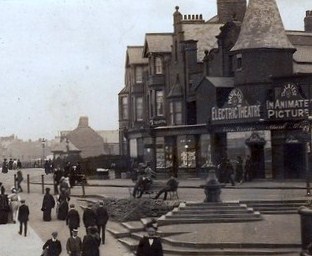 Located in the Tyneside holiday resort of Whitley Bay. The Salt Water Baths was built at the side of the Whitley Park Hotel on the Promenade in 1897.

In April 1909, the owner Robert L. Grice placed a wooden floor over the baths and converted the building into the Baths Pavilion Cinema. By June 1909, it was known as the New Cosy Pavilion Cinema.

In July 1911, it was known as the Pavilion Electric Theatre.

By 1923, it was operated by Whitley Bay Entertainments Ltd. It was destroyed by a fire on 20th December 1923.