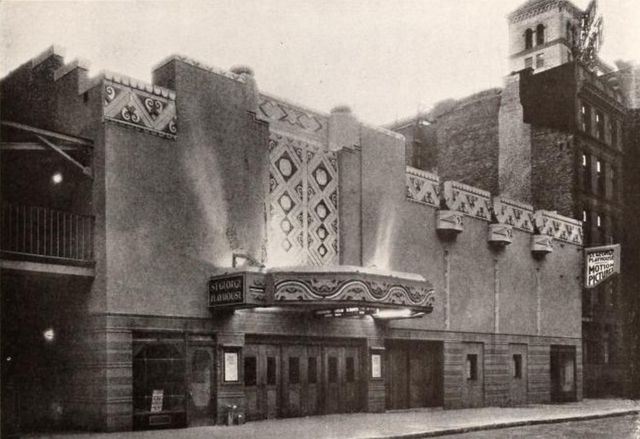 This elegant theater once stood on Pineapple Street in the posh Brooklyn neighborhood of Brooklyn Heights. It was one of the first theatres to be designed and decorated in an Art Deco style and opened on December 25, 1927, with the French movie “Tillers of the Soil”. It had a box on the left of the proscenium, which in the early days held musicians.

By 1950 it was operated by Liggett-Florin Booking Service. It was closed in 1965, and torn down decades ago to make way for a high-rise apartment development.

The St. George Playhouse was located at 100 Pineapple Street and it seated 992 people.

Opened about 1929, the architects were Schlanger & Ehrenrich.

Looking at photographs and plans published in the book “American Theatres of To-day” Volume Two (1930), an unusual feature of the building was provision for a small musicians box on the left side of the proscenium arch (instead of the usual centrally place orchestra pit in front of the screen). The right hand side of the proscenium arch had a decorative grille, behind which were the theatre organ pipes. There was no stage at this theatre, so it was designed and built specifically for the showing of motion pictures.

I believe this theatre sometime in the mid 60’s went by the name of Pineapple St. Cinema. This is totally based on my memories.

The photo shows what a jewel box the Playhouse was. As much as I’ve enjoyed the Brooklyn Heights twin across the street, it has all the charm of a auto mechanic’s garage.

Plans for the St. George Playhouse were announced in the March 27, 1927, issue of the Brooklyn Daily Eagle. The project was budgeted at $175,000. The location was given as the south side of Pineapple Street, 38 feet west of Fulton Street. Fulton Street is now Cadman Plaza West.

Incidentally, why doesn’t Brooklyn Heights get a neighborhood section in Cinema Treasures' listings, the way other districts of Brooklyn do? I had to click through ten pages of maps and take several side trips before I found this theater.

The photo that Warren posted may not offer a definitive view, but it does not appear that there were any boxes off the balcony, as described in the introductory comments.

The Brooklyn Theatre Index provides a closing date of 1965. This surprised me, since I thought this whole area had been demolished to make way for a huge urban renewal project by the late 1950’s. But I guess this area survived for a few years longer …… In fact, in 1962, the theater was “newly christened” as a foreign film and revival house, with its capacity reduced from 992 to 600. So, efforts were made nearly to the end to keep the place going – until urban renewal rudely intervened.

I would love to see the interior of these: Williamsburgh Theatre, Commodore, Marcy, and Ridgewood. Any idea if al the interiors of a new theatre were photographed?

Shirley MacLaine made a guest appearance at the St. George on November 23rd, 1962, as part of a two-day Thanksgiving holiday tour for the “Premiere Showcase” launching of “Two For the Seesaw.” Ad displayed here