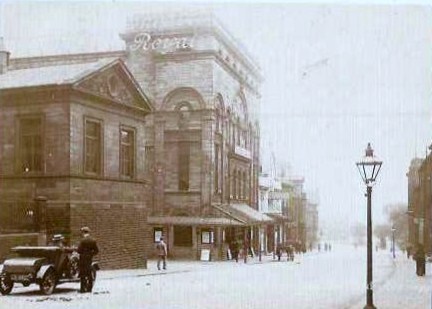 The Theatre Royal was built on the site of an earlier Theatre Royal which was destroyed by fire in 1880. The new Theatre Royal was opened on 11th April 1881 with a production of “As You Like It”. Seating was provided in orchestra stalls, dress circle, balcony and gallery levels. There were four boxes on each side of the 26 feet wide proscenium. The stage was 39 feet deep, and there were four dressing rooms and eight chorus rooms.

The Theatre Royal was mainly a drama theatre, and had little film use. It was closed and demolished in 1961. A market was built on its site.

Scroll down on this webpage to see additional history and pictures of the Theatre Royal in Huddersfield.