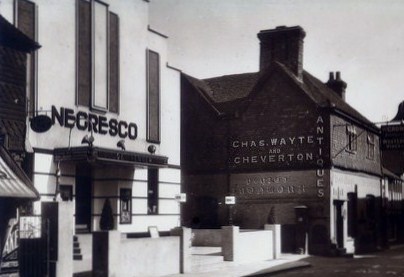 Located in Edenbridge, near Tonbridge, Kent. Originally built as a public hall, it was converted into the Cinema, which opened on 20th December 1927.

By 1936, it had been taken over by a new operator and re-named Negresco Cinema. The cinema now had a new Art Deco style facade, and there was a cafe attached. It had a 16 feet wide proscenium.

The Negresco Cinema was closed in February 1959 with Basil Radford in “Whiskey Galore”. It was converted into Cheverton Antiques, which operated until 2012, although the Art Deco facade had been removed. It was demolished in 2013, and flats were built on the site.