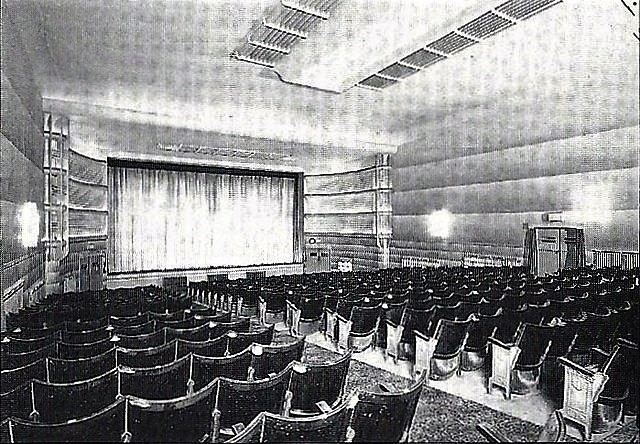 Located in Wellington, Shropshire. The Grand Theatre was set back from the road, up two sets of steps. Originally a live theatre with 986 seats, the auditorium was rebuilt in 1938 in an Art Deco style with seating for 800, all on a single level.

It was modernised in 1968. The Grand Cinema was taken over by the Granada Theatres chain on 17th March 1975. They closed the Grand Cinema on 25th October 1975 and it was converted into a Granada Bingo Club from 22nd April 1976.

Later becoming a Zetters Bingo Club it was closed and became a furniture store which was later destroyed by a fire. The remains of the building were demolished around 1997. The modified steps with the original flanking walls remain, and on the site of the Grand Cinema was built Pussycats Nightclub.

I have put on an Exterior picture.. I found it…

After Granada closed it, the Grand became the venue of a nightclub called Roar which did not last very long.

It then became used as a furniture shop but there was a major blaze which burnt the building to the ground. Firecrews from all over Shropshire converged at the fire, but saving the building was a hopeless task, but they were able to stop the fire reaching the neighbouring Rechabite Hall and other nearby buildings. The owners of the Silver Fish fish and chip bar and restaurant bought the site and built the Pussycats nightclub

Incidentally Mr Wright, the owner of the Grand, invented a 3D cinema projector but due to the timing of his invention (Technicolor had just come out) he could get no interest in his invention.

Mr Wright Had put the Theatre up for Auction.. We Theatre Administration Ltd., who had the Clifton in the Town was going to attend and bid for the Grand.. Granada circumvented the Auction and made an offer to Mr Wright.. the rest is history I must add that the Grand was kept immaculately by Mr Wright..

Operated by Zetters after Granada Bingo.