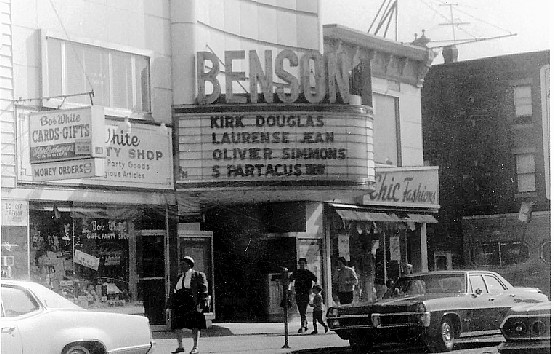 This theatre was also known as the BELL. Capacity was 499 seats. The name change was Sept.23,1936. It was a last run house and closed in the late 60’s and was converted to a TV store.

Here is a slightly larger version of the thumbnail photo:
http://tinyurl.com/38a9uh

The former Benson Theater is now a cellphone store. Function should be retail.

I think there might be information missing from the Glazer collection and this theater’s Philadelphia Buildings page regarding the original name of the house. The Moving Picture World of July 12, 1913, in an article about Philadelphia theater operator Marcus A. Benn says there was a Benn Theatre then operating at Woodland and 64th:[quote]“Marcus A. Benn, of Philadelphia, went into his first theatrical venture in 1908, after having been a manager of a sewing machine company for over fourteen years. Since that time he has built and promoted more than twelve theaters, all of which are now being operated successfully. He is the sole owner of the Benn Theater, at Sixty-fourth Street and Woodland Avenue, and is a stockholder in, and secretary-treasurer of, the A. B. C. Theater.

“At Eighty-fourth Street and Eastwich Avenue, Mr. Benn has a picture theater under way, and there is no doubt but that he will create quite a stir among motion picture men in Philadelphia when he announces the exact spot on Market Street, east of Broad, for the location of another enterprise.

“Mr. Benn has an eye for beauty as well as for architectural construction. This fact is particularly noticeable in his A. B. C. and the Benn Theaters. Between August 29 and September 18, 1913, a delegation of experts from all parts of the world will hold a convention at the A. B. C. Theater to discuss matters pertaining to the advancement of the motion picture industry.”[/quote]A biography of W. C. Fields says that his family home at 6320 (or 6328) Woodland was torn down in 1922 to make way for the Benn Theatre, so the Benn Theatre mentioned in the article was not demolished to make way for the Benn Theatre that still stands down the block. It seems most likely to me that the Benn Theatre of 1913 was the house that later became the Benson. Possibly it was renamed the Bell Theatre when the new Benn opened in 1923. The name Bell certainly would have easily fit on signage that formerly read Benn.

The Chronology page for the Bell Theatre at Philadelphia Buildings gives the construction date of 1912-1914 for the building, and names the architects as Anderson & Haupt (Julius J. Anderson, architect, and Max Haupt, engineer.) If the firm planned alterations the building after the theater opened, this house could have been in operation as early as 1912, rather than 1914. If it was indeed the original Benn Theatre, it was certainly in operation by July, 1913.

September 23, 1936 was the date the theater opened, NOT the date the name changed. The V shaped marquee and the square block design of the upper façade have survived. Today it’s a cell phone store and computer repair.

Spartacus was the last film to play here. It closed in the late 60’s.

I was last in there in the late 1980s when it was used as a warehouse. A metal roll gate opened where the screen had been. Then, the art deco paiting designs on the walls were still recognizable. Don’t know if it is still used for anything or still standing.

There was a Benn & an Benson movie on Woodland Avenue. The Benn was in the middle of the block and later was a John’s Bargain Store. The story I was told as a little boy was the Benson was owned by the son of the owner of the Benn.

The Benn was a RKO Stanley Warner theater. To my knowledge the Benson was not connected with the Benn and RKO SW theaters.