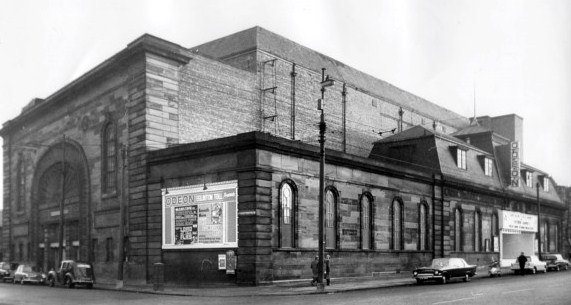 Located in the Crosshill district to the south of Glasgow city centre near Eglinton Toll. The BB Cinerama was an imposing structure at the corner of Victoria Road and Butterbiggins Road. It was opened on 7th August 1922 by the J. Bennell circuit, and replaced his earlier BB Cinerama just a short distance away on Victoria Road. The ‘BB’ stood for ‘Bright & Beautiful’ and the name Cinerama had nothing to do with the later wide screen process. The building was designed by architect McInnes Gardner and had a Neo-Classical style.

In December 1928 it was taken over by the Gaumont British Theatres chain and the auditorium was extended at the screen end to the plans of architect James L. Ross, with the seating capacity increased to 2,662 when it re-opened in 1931.

By 1934 it had been re-named New Cinerama. In 1964, it was refurbished, removing all original decorative features, and was re-named Odeon from 24th February 1964. Eventually only the circle seating area was being used, and the Odeon was closed on 24th October 1981 with Walt Disney’s “Snow White and the Seven Dwarfs”.

The building was demolished in late-1986, and a petrol station was built on the site.

This webpage has additional detail and pictures the this theatre over the years.