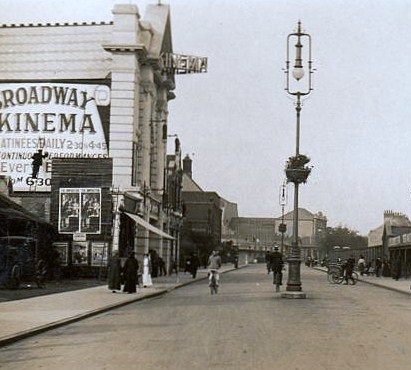 The Broadway Electric Theatre was opened on 17th December 1910 with 700 seats and was designed by Peterborough architect Alan W. Ruddle. The facade was rebuilt in a Neo-Classical style and a balcony was added in August 1913, giving a 1,000-seat capacity. It was now operated by the Gale & Company chain and had been re-named Broadway Kinema. In August 1919 it was taken over by the Provincial Cinematograph Theatres(PCT) chain, and was enlarged to a 1,560-seat capacity. The proscenium was 30 feet wide and the stage 6 feet deep. There was just one dressing room.

PCT were taken over by the Gaumont British Theatres chain in February 1929. In February 1946, alterations and a refurbishment were carried out by architect W.E. Trent. It was re-named Gaumont on 5th November 1961, and closed as a cinema on 19th October 1963 with Tommy Steele in “It’s All Happening” and Dennis Price in “Watch It Sailor”.

It was converted into a Top Rank Bingo Club which was opened on 31st October 1963 by comedian Tommy Trinder. Later operating as a Surewin Bingo Club, part of the Hutchinson Group of Burnley, this closed in 1983.

The building was demolished in 1987, and an amusement arcade, shops and parking facilities was built on the site.

A picture of the theatre as the Broadway KInema can be seen here.