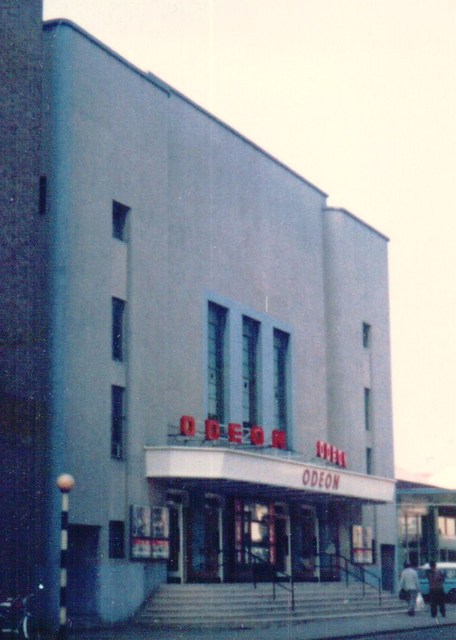 The Odeon Peterborough was an original Odeon cinema of the Oscar Deutsch Odeon Theatres Ltd. chain. It opened on 2nd September 1937 with Irene Dunne in “Theodora Goes Wild”. It was designed by Harry Weedon (revising an earlier design by Roland Satchwell) and had 1,752 seats set in a fine streamline modern Art Deco style auditorium.

It was modernised in the late-1950’s and seating was reduced to 1,512. Then, in February 1973, it was tripled, with 544 seats in the former balcony, using the original screen, and 110 seats in each of Screens 2 and 3 under the balcony in the rear stalls. These were closed by the Rank Organisation in November 1991 and for the next decade the building lay derelict and boarded up, descending into a parlous state. Probably only its location at the far end of Broadway saved it from redevelopment, had it been more central it would have gone by now.

However this tale has a happy ending, for in 2001 the cinema was de-tripled, restored (architect Tim Foster) and re-opened as a live theatre/cinema/conference venue.

Now seating 1,200 in stalls and balcony, the theatre has a platform stage in the original proscenium, the plasterwork grilles either side have been restored and enhanced with concealed lighting that can change colour. The circle foyer has been opened up and forms an elegant bar, and a new build project to one side, offers an art gallery and restaurant, plus offices and accommodation.

The facade has been altered, by opening up the central portion and extending it out slightly at first floor level, with a glass screen. There is also a new extension on the back, housing the dressing rooms and more offices.

This is now one of the finest interiors remaining from the original Odeon chain, giving a true feel of a 1930’s cinema palace.

On Sunday 25th January 2009, after a break-in, in which five computers were stolen, a fire broke out. It spread very quickly and severely damaged the stage and also the front few rows of seating in the stalls. The entire building also received a lot of smoke damage and it was estimated will be closed for at least 6-months. However on 6th March 2009, the owner, Rinaldo Fasulo announced that due to the insurance company refusing to pay out for repairs, the Broadway Theatre would close.

In late-2010, the building was taken over by the StageLive group and immediate repairs and renovations were made. The Broadway Theatre re-opened on 12th February 2011.

Closed in March 2020 due to the Covid-19 pandemic and the ban on live theatres still not being allowed to open, in August 2020 it reopened screening classic movies twice daily on Friday, Saturday & Sundays.

The Broadway Theatre is reopening in February 2011 after repairs.
http://www.thebroadwaytheatre.co.uk/

Repairs are progressing well as these images, taken in January 2011 a few weeks ahead of opening show:–

Unfortunately, this theatre opened for a mere 6 months in 2011 before closing again after it emerged that it was being run by a notorious fraudster. It is now on the market for £2.8 million. It is in very good order but whether it ever opens as a theatre again remains to be seen. http://www.theatreforsale.co.uk/?gclid=CNmzisPg8LcCFfDMtAodekUA9w

I was about to say how refreshing this report was when I clapped eyes on the last comment – back in the balance again….

Re-opening again this winter with a programme of Bill Kenwright productions. Its for a few months at first but hopefully it will be well supported.

Now in trouble again. There were a couple of years of very successful Bill Kenwright productions as well as other one off events, but the owner has now put in a planning application to turn it into flats. It is a large, well equipped and fully functioning theatre featuring one of the best preserved Odeon interiors in the country but it is in danger of being lost. There is a petition to Peterborough Council here https://www.change.org/p/peterborough-city-council-refuse-planning-permission-for-the-broadway-theatre-to-be-converted-to-flats-30159e54-5eb0-4fb9-bcd8-31857bcb8465?recruiter=647615636&utm_source=share_petition&utm_medium=email&utm_campaign=share_email_responsive