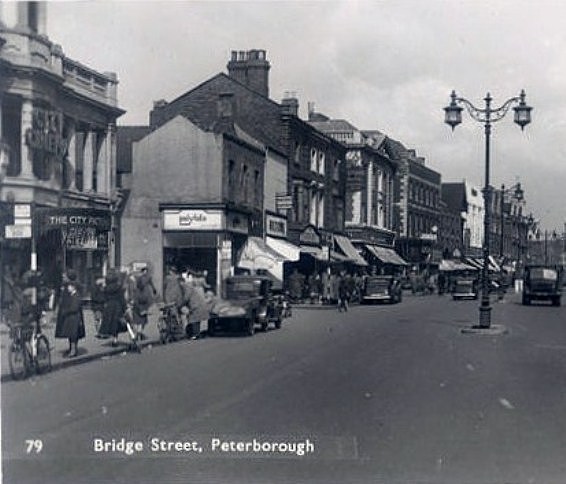 Located in Peterborough, Northamptonshire. The City Cinema was opened on 27th March 1927. Seating was provided in stalls and circle levels with boxes along the side-walls. The stage was 40 feet deep, behind a 26 feet wide proscenium. There were four dressing rooms. It was equipped with a Conacher 4Manual organ that had 30 speaking stops, which was opened by organists Cooper Francis and G. Rhodes. The cinema also boasted a café and a ballroom.

The City Cinema was the first cinema in the town to screen ‘talkies’ when Al Jolson in “The Singing Fool” was shown in 1929. In 1930 it was fitted with an RCA sound system.

By 1937 it was operated by Peterborough Amusements, owned by the Bancroft family. In 1942, a German incendiary bomb fell on the stage, and it destroyed the Conacher organ. The City Cinema was closed for six weeks while repairs were carried out. Alterations were made in August 1956, when it was equipped with CinemaScope. The proscenium was now 30 feet wide, the side-wall boxes having been removed. The first CinemaScope film to be shown was Jack Hawkins in “Land of the Pharaohs”.

The City Cinema play its last regular programme on 20th March 1960 “Rita Hayworth in "The Story on Page One” and “"Assignment New Zealand” which had played for 7-days. The following day (a Sunday) “The Lone Ranger” and The Bowery Boys in “Crashing Las Vegas” closed the cinema for good. It was demolished in the summer of 1961, and an extension to the adjacent Woolworth’s store was built on the site. It later became a branch of Marks & Spencer, which still operates in 2013.

A nice cosy atmosphere as I recall but there was one seat in the auditorium directly behind one of the pillars supporting the circle and if you were unfortunate enough to occupy it, there was no way you could view the screen! You had to rely on your girlfriend to whisper a running commentary on what was happening.