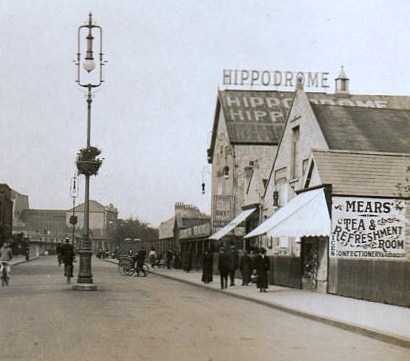 The Hippodrome Theatre was opened on 16th September 1907. It was a fairly basic brick building, with an iron roof. It was taken over by Fred Karno in 1908. By 1909, Bioscope films were being screened as part of the variety programme. Artistes such as Marie Lloyd & Charlie Chaplin appeared on stage.

Taken over by new owners in June 1922, it was re-named Palladium Theatre. It was leased to the Bancroft family in the mid-1920’s and re-named Palace Theatre. They purchased the lease in 1927. Programming Cine-Variety, it was soon operating as a full time cinema.

In 1935, the Bancroft family were planning a new luxury live theatre to be built on a site adjacent to the Palace Theatre. The Embassy Theatre was constructed, and opened on 1st November 1937. The Palace Theatre was closed on 24th November 1937 with Jack Holt in “Trouble in Morocco” and Rosco Karms in “Clarence” plus a ‘Silly Symphony ’ cartoon “Woodland Cafe”. The building was converted into a garage. It was demolished in 1979, and a Tesco supermarket was built on the site.

Here is a picture of the theatre as the Hippodrome.