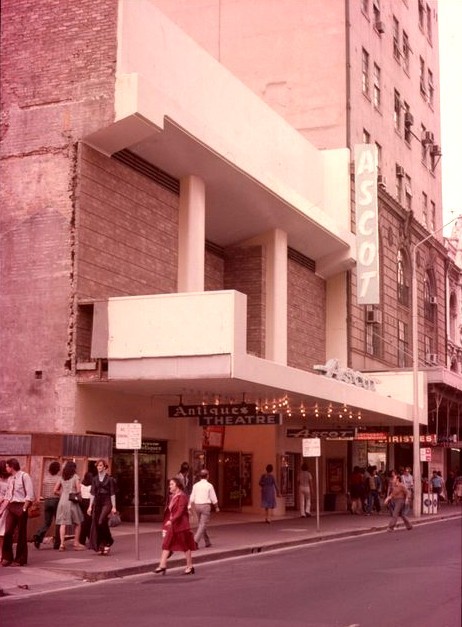 Located in Sydney city centre. Tom Virgona built a much needed wide screen theatre for the increasing number of big format films back in the 1960’s. The Ascot Theatre was opened on 12th May 1966 and had the second widest screen in the city, surpassed only by the Plaza Theatre and became the preferred outlet for Warners and MGM.

Vigona had built suburban theatres with stadium seating and repeated it here. Two thirds of the auditorium was classed as the lounge, the back of which rose 35 ft. above Pitt Street.

The facade featured two structural columns with a metallic gold finish. The simple, elegant design was the work of architects John Roberts Associates who were responsible for the interiors of Hoyts theatres. The site had previously been occupied by appliance chain H.G. Palmers but the store burned down in 1965. With this in mind the Ascot Theatre construction emphasized fireproofing.

The Ascot Theatre closed around 1984. It was converted into Braschs record store and was later demolished. It was next door to MGM’s Liberty Theatre which was replaced by the 3-screen Greater Union Pitt Center.

70mm films that played at the Ascot can be found within this list.

I could be wrong and maybe there was another single screen cinema in the Pitt St block between Park and Market Streets in the early 1980s with a similar name(and I do not mean the Lyceum Theatre). This says the Ascot was closed in 1976 but I remember seeing Superman 3(the one with Richard Pryor) there in 1983. Well when I say I saw Superman 3 I say most of it. My mother and I were late and missed the first few minutes. I also remember playing the video game Frogger there around the same time period. If I remember correctly the Ascot was run by Village where as the Pitt Centre and the Lyceum, both in the same block, were run by Greater Union.

Yes, the Ascot was still screening films at least until 1984. The Giorgio Moroder restoration of Metropolis played there that year. I have clippings of the original nespaper advertisements and reviews.