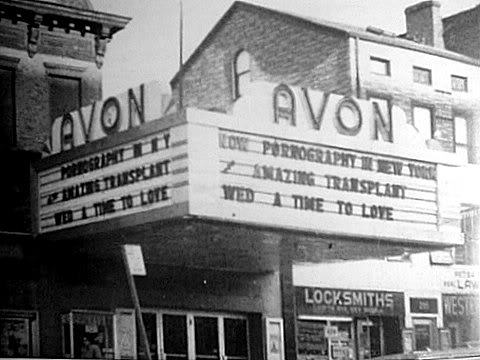 McDonald’s bought the site, closed the decaying theater in 1975, razed it and build a fast food restaurant there.

The theater stood a block away from the RKO Prospect Theatre. If you go into 5th Avenue Locksmith next door, you will see a photo of the theater’s facade. Its marquee announces a Jerry Lewis movie.

Just discovered this site. I think my grandfather, Julius Charnow, may have owned or leased the Avon in the 1950’s. Does anyone know of a way to research this?

Wow! I was about 10, it was December 7, 1941, the film (don’t what one) was interrupted and the manager (?) of the theatre announced the bombing of Pearl Harbor. It scared the heck out of me and I ran all the way home to my family. We were living in a brownstone near 5th Avenue and 5th Street. Anyone out there who was around in those days? I went to PS 39, at 417 6th Avenue, Brooklyn, NY. BTW PS 39 is now known as “The Henry Bristow Landmark School.” My daughters and I visited the school in May 2009. As a landmark school its exterior is just like it was when I attended. See http://www.ps39.org/ Any PS 39 alums out there?

Yes, Tinseltoes, it was a Sunday. I’m curious as to what movie was playing. Do you have a resource for that sort of info?
Are you still in Breooklyn?

Neighborhood sub-runs, not affiliated with any of the major chains, would distribute cardboard posters among the local merchants for display in shop windows, announcing the features for the week. The posters were fairly ordinary, just print and no photos with the basic information. I don’t recall any listing of starting times as patrons were more than likely to walk-in in the middle of the feature.

My Mom and Dad were from nearby Red Hook. They told me stories about going to the Avon and The Prospect which was a block away.

I loved this little theatre. My best friend,Victor,and I would go to the movies every Saturday – a double feature with several cartoons in the early 50s. I believe when we first went the the cost was 10 cents. It eventual went to 25. I remember seeing the the Four Horse of the Apocalypse starring Glenn Ford with my father there. It was one of the moview that shape my life-long philosophy.

The photo I posted does not look like the same building in the other 3 photos. But the current street view of 9th Street buildings is mostly the same as the 1940 photo. It’s probable the other Avon photos are of a different theatre.