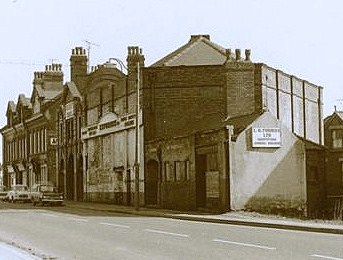 Located in the northeast Sheffield district of Grimesthorpe. The Picturedrome opened on 18th March 1912. Seating was provided in stalls and a small circle. It had an attractive brick facade with a pediment over the arched entrance. The auditorium ran parallel to Upwell Street. In 1916 a 16 feet deep stage and four dressing rooms were built. Variety performances were included as part of the film programme.

In April 1925 it came under new management and was re-named Regent Theatre from 4th May 1925. It was in use as a live theatre until May 1929. Taken over by East of England Cinemas, it was equipped with a British Talking Picture(BTP) sound system and re-opened as a cinema in December 1930. After a couple of more new operators, by 1935, it was operating again as a live theatre presenting variety and revues. The Regent Theatre was finally closed on 15th June 1940.

The building became a furnishing store for Wades and the Regent Supermarket. The building has since been demolished, except for a small lower section of the front facade and side-wall of the auditorium, and Upwell Street Tyre & Auto Centre now operates from the site.