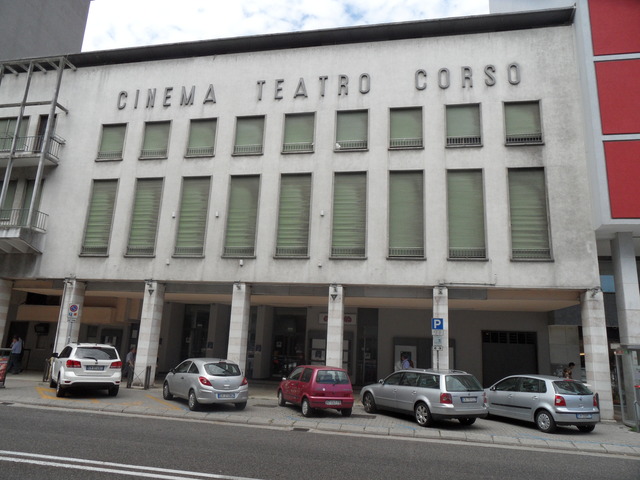 The Cinema Teatro Corso/Corsino was a two-screen cinema in the city of Mestre, the ‘mainland’ part of Venice. The cinema occupies the complete space of a building in Mestre’s main street Corso del Popolo and consists of one very large screening room (Corso), on which construction began in 1938 but wasn’t completed until 1949, and one small screening room (Corsino) which was created in 1987 in space adjacent to the large screening room.

The Cinema Teatro Corso consists of a large stalls section and a huge balcony featuring stadium seating. If you occupy one of the last rows of the balcony you look steeply down onto the screen, which conveys a very spacious atmosphere to the cinema experience. One specific feature of the cinema is that given the huge dimensions of the screening room in breadth, length and height the screen is rather small, so you have the feeling to look onto a stage. This type of cinema represents in my view a rather early style of cinema architecture, which takes classic theatre architecture as a model. Classic lamps on the walls create a festive atmosphere. Thus, this cinema is a giant worthy to be visited if only for its architectural features.

Unfortunately, after sixty years of operation, the cinema’s days were numbered, as a new multiplex opened in the next-door cultural space Candiani. There have been plans to use the Cinema Teatro Corso as a theatre in the future, a function that it has held a few times in its history.

Further to the above comments, the new multiplex in the Centro Culturale Candiani opened in December 2013 and, on my visit to Mestre in June 2014, there were no films being advertised outside the Cinema Teatro Corso. Presumably, as predicted, it closed when the multiplex opened.