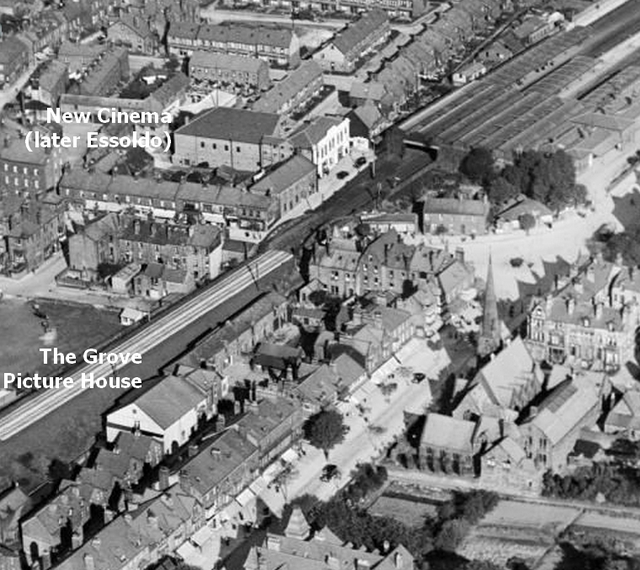 Located in Ilkley, West Yorkshire. This cinema was situated behind the retail premises on The Grove, in the space between buildings and the (now gone) railway embankment.

It opened as the Picture House on 21st February 1913, having been converted from a lecture hall built in 1881, and converted by the owners, the Croft family, who were local coal merchants and antique dealers. The original capacity was 728.

In 1929 it was renamed the Grove Picture House. Sound was installed in 1930. In 1946 the Star Cinema chain based in Leeds acquired it, and operated it until its closure in December 1967. The local authority acquired it for demolition in 1968. With the removal of the adjacent railway embankment (trains ceased to be able to pass through Ilkley) the whole area behind the retail premises on the Grove was radically changed.

The Google map location is slightly out. The cinema was located directly behind what is now W H Smith and Peter Jones stores on The Grove.

My Dad was Chief Projectionist there during the post war years and my Mum was a cashier. Dad said it was a lovely little cinema with very well heeled regulars – as one would have expected in Ilkley. Circle seats were bookable every evening. There were two Managers whilst he was there: first a Mr Wiggins and later a Mr Longstaff, both of whom Dad liked very much. Owners, Star Cinemas Ltd were a small Yorkshire based company (originally in Otley and later in The Headrow, Leeds) headed by Walter Eckhart. At that time they had well maintained small and medium sized venues mainly in market towns. Things were to change in the late 1960’s when, during the decline in admissions, Star concentrated more on Bingo in addition to pioneering the cheap conversion of cinemas into multi screen outlets using the name ‘Studio’; these would quite often occupy the former circle area of a cinema whilst Bingo was ‘the name of the game’ in the former stalls. Walter had passed away by this time and the two sons, Rodney and Derek Eckhart were at the helm.

Dad was a lover of Cinema (which helps when you work in the industry) and was also an afficionado of theatre organs. The opposition theatre, the New Cinema (which was acquired by Walter Eckhart’s arch rival, Sol Scheckman and renamed Essoldo) was slightly larger than the Grove and it also had an organ (a Compton?) but somehow Dad never got round to making himself known there which he rather regretted as he would have liked to see the auditorium, the projection suite – and the organ.

I later worked in the industry as a Manager with ABC whose nearest theatre to Ilkley was Keighley Ritz although that was a place I never worked in. At least it still exists, I believe, albeit as a Bingo Hall…..