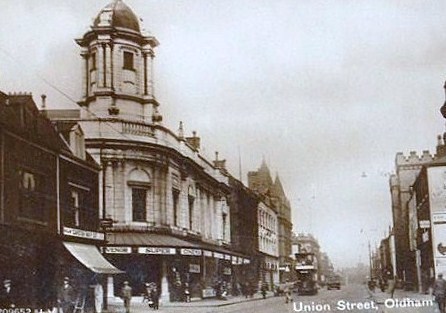 The Grosvenor Super Cinema was opened on 7th August 1920 by Picture House (Oldham) Ltd., and designed by Southport based architect George E. Tonge. The proscenium was 27 feet wide. In September 1929 it was equipped with a Western Electric(WE) sound system and showed the first ‘talkie’ in Oldham “The Singing Fool” starring Al Jolson. It was then operated by the Ogdens Theatres Circuit, based in Manchester.

The Grosvenor Super Cinema was closed in November 1963, and was converted into a bingo club. It later became a nightclub known as the Cat’s Whisker Club, and then had a change of owner and was re-named Eddies Place. This closed around 1984, and the building was demolished in 1985 to build an office block known as Tweedale House, which today houses the Job Centre.