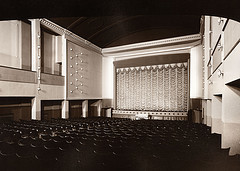 The Palladium Cinema was opened in September 1913 with “Apple of Sodom”. It was designed by architect Thomas Hilton. It had a seating capacity for 1,841. Taken over by Associated British Cinemas(ABC) in 1935, the seating capacity was 1,918 (later reduced to 1,841). It was closed for modernisation on 1st November 1958.

It re-opened as the ABC on 23rd February 1959 with a reduced seating capacity of 1,456. Closed on 1st October 1977, it was converted into a bingo club. However it re-opened as a cinema in December 1985, using only 420 seats in the former circle area. This closed on 5th June 1986, and it continued as a bingo club, eventually closing and being demolished in 1990.

another one of my shows,sorry it got demolished.