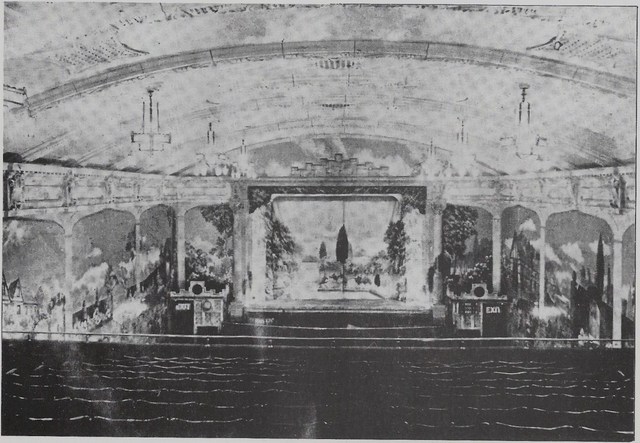 Located in Bearwood, a district to the south of Smethwick, in the southwest of Greater Birmingham. The Majestic Picture Theatre was opened on 7th February 1916 with “The High Road”. It was built for Edward Hewitson who was building several cinemas in the local area. Seating was provided for 1,000 in the stalls and 326 in the circle. Internally, the decorative scheme was in the style of a Baronial Manor House. The proscenium was 35 feet wide, the stage 14 feet deep and there were four dressing rooms. There was also a cafe attached, for the convenience of its patrons.

In 1939, it was closed to enable a new modern style facade to be built, to the designs of architect Roland Satchwell. The Majestic Picture Theatre was re-opened on 7th August 1939 with “Little Tough Guys in Society”.

In the early-1950’s it was re-named Majestic Cinema. It was closed on 21st February 1959 with Tab Hunter in “Damn Yankees” (What Lola Wants). The stalls area was converted into an indoor market hall, known as the Kings Hall Market. It later converted into a dance hall.

In 1977, the owners of the building leased the former circle area to an independent operator and it re-opened as the Studio Cinema, with 250 seats. The opening films on 31st March 1977 were “Gumball Rally” and “Lets Do It Again”. This was a short lived venture which had closed by September 1978. The auditorium was demolished in late-1978, and the front of the building in early-1979.