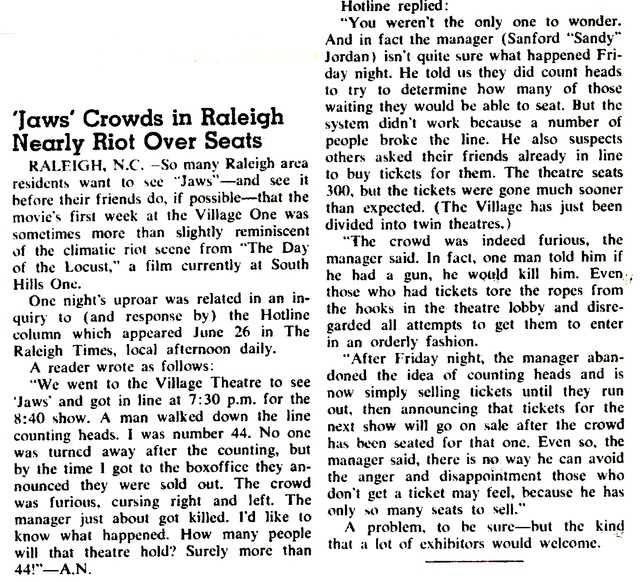 The Cameron Village Theatre was part of the first shopping center ever built in Raleigh, NC. The shopping center opened on November 17, 1949, and it became a destination showplace of shops and services. The stores consisted of several when it opened, among them was anchored by Colonial/Big Star Grocer, Roses 5 and 10 Discount Store, three major department stores: among them were Sears, Thalhimers and Penney’s (JC Penney), and speciality shops that included Boylan-Pierce, Balentine’s Cafeteria and the Village Pharmacy to name a few.

Beautifully designed and decorated inside and out, the Cameron Village Theatre was a showplace that had the most relaxing atmosphere in the most modern manner, that brought the Triangle area some of Hollywood’s best. At the time of its opening, the Village presented the latest projection equipment and futurist interior furnishings - a first for Raleigh and Eastern North Carolina. The auditorium itself was a huge 750-seat theatre, complete with extra wide aisles and it offered for the first ever ‘floating seats’ for maximum comfort and convenience when other patrons leave or enter your aisle. There was also acres of free parking.

The theatre was renovated in the 1960’s, and more parking spaces were added. On June 20, 1975, a second auditorium was created by twinning the original auditorium down the middle. It was renamed Village Twin Theatres and it was acquired by Martin Theatres chain. Operated by Carmike Cinemas, as more shopping centers were built in the city, the Cameron Village Shopping Center’s fortunes fell. During one of the Center’s many makeovers, the twin cinema closed in March 1990 and was demolished in 1991.

The theater once stood where K&W Cafeteria is located now. Information regarding this theater should be revised as “closed”, “demolished”, “750 seats”

The Cameron Village Theater got a lot of the movies made by Metro-Goldwyn-Mayer, Columbia, Disney and Universal. During the 60’s a ton of the Elvis Presley films made by MGM played here first-run.

In April 1984, tried to see Friday the 13th The Final Chapter at the Village Twin, but was sold out.

Jay, The same thing happen when I tried to see RAIDERS OF THE LOST ARK on its opening weekend of June 12,1981. The lines for this movie snaked all the way to the opposite end of the Cameron Village Shopping Center were it was completely sold out within minutes and that went for its matinee showings too on its opening weekend. Raleigh played it at two cinemas..the other was the Tower Theatres 1 & 2 in East Raleigh.

This theater got a lot of the MGM and Columbia product. Not to mention the longest-running engagement that this theater booked was on June 12, 1967 for it showing of THE DIRTY DOZEN that brought it records crowds for 15 weeks.

I saw Ben-Hur at Cameron Village when I was a student at NCSU. A fellow student (really from the sticks)went with me, and he had never before seen a theatrical movie, so I didn’t know what to expect from him. Oddly, he thought the goriest scenes were hilarious. Go figure. 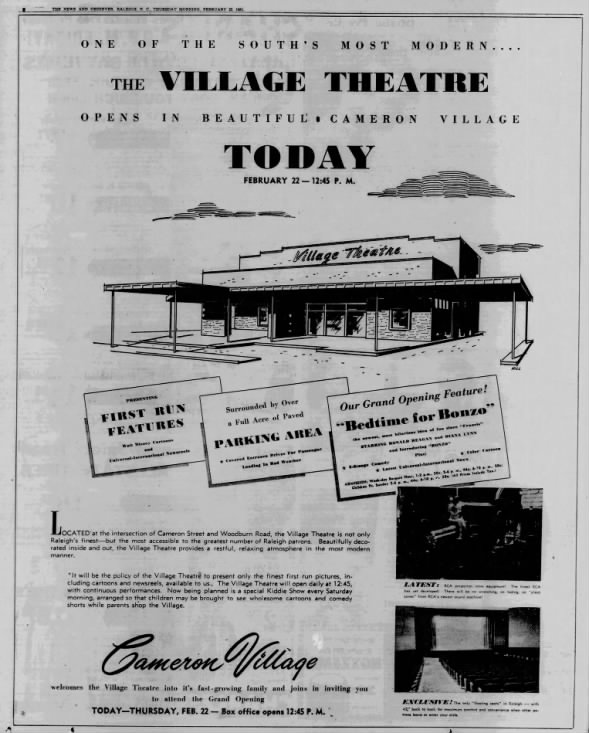 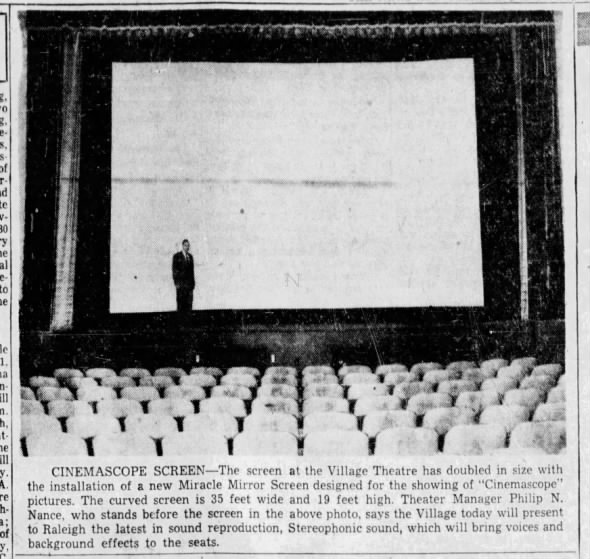