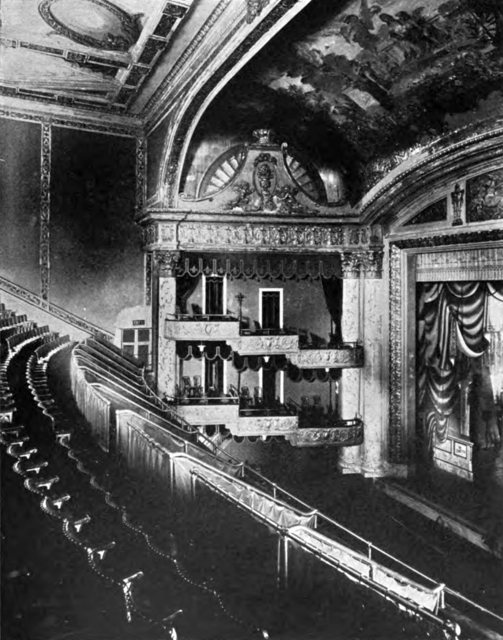 The former Loew’s Melba Theatre stood at the intersection of Livingston Street and Hanover Place in downtown Brooklyn. The palatial theatre was part of the Loew’s chain and stood within walking distance of the Metropolitan Theatre, Tivoli Theatre and Duffield Theatre.

A very early casualty of television, closing in 1954. It was razed for an outdoor parking lot, which also met its fate in the 1980’s when a high-rise office building rose on the site. It was built for the Metropolitan Transit Authority. This has since been replaced by a four level parking & commercial structure.

In the end glass and steel have replaced stone and neon.

Gin is correct about this theater having its entrance in mid-block between Nevins and Bond. The photo of the Keeney Theatre’s facade in a 1915 article in the trade journal Architecture and Building shows slivers of the adjacent structures on both sides. A person approaching Livingston Street from the north along Hanover Place would have seen the ornate theater front almost directly ahead of them. The theater’s auditorium, at right angles to the lobby building, was on the south side of the block, adjacent to Schermerhorn Street.

The article also has three interior photos of the Keeney Theatre. It’s now available online at Google Books (click on their Page 140 link.)

Brooklyn’s current Greyhound bus terminal has an address of 288 Livingston, and takes up the half block bounded by Livingston, Bond, and Schermerhorn streets that once included Loew’s Melba. This is not, as the intro currently states, a high-rise office building, but a four-level parking and commercial structure. The theater’s entrance was located where the garage entrance is now, opposite the end of Hanover Place. The tiled hipped roof above the entrance can be picked out in a 1954 aerial photo available for viewing at Historic Aerials, so it was still intact at that time.

Joe, it was great to view your vintage photo of this theater. I must have missed it when it was first posted.

Given that Joe’s Sept. 9th posting clearly cofirms my earlier statement that a parking garage – and an extremely ugly one at that – currently occupies the site and NOT an MTA office building, the introducion should be changed to reflect this well documented fact.

Hello All,
I’ve found the discussion thread above fascinating, having arrived thanks to Tinseltoes response to my query posted over at: /theaters/3979/ regarding Keeney’s Theatre. It’s a pity though so many of the links above are no longer active – I couldn’t see the photos of the inside of the theatre, nor the ebook because I am outside the US. Never mind!

My German grandmother was part of a vaudeville act, sometimes called the Six Rockets and also the Six Marinelli Girls between 1923 and 1931, and toured much of the US. She can be seen in front of a Keeney’s poster here: View link The back of the photo says 1925.

Following the note above that the theatre became Loew’s in 1925, would anyone be able to indicate when exactly the theatre changed hands in 1925? It would help me date the photo more precisely.

I would have many other questions related to my grandmother’s life as a Loew’s and Vaudeville act, salary, life on the road, the theaters she played and so on. I have more interesting photos and vaudeville posters to share which I think will be of benefit to this community too. One challenge is finding the names for the theatres shown. I trust the ‘Looking for help’ message board will be an appropriate starting place. The background is that I am writing a book on my grandmother’s life and origins. Many thanks in advance for any assistance. Inesita

While I guess the past names for this theater have been further clarified, the introduction still incorrectly states that the site is now occupied by a high rise MTA office building. As clearly noted above, this is not correct and the site now “hosts” an extremely ugly parking garage.

Hopefully, this error will also be addressed.

Back in the late 30’s and through the 40’s and 50’s I grew up in the downtown area of Brooklyn on Smith Street. When my mother was decorating the apartment she bought a remnant, carpet, for our living room. It was some carpet left over from the Melba movie theater when they redecorated. It was beautiful, red with a gold leaf running through the carpet. Also remember going to the movies on Friday nights, Vaudeville acts were still preformed. There was also dish night. You got a dish and eventually could have a whole set of dishes.

Elegant theatre and great proscenium. Curtain looks beautiful too. Should have been saved.