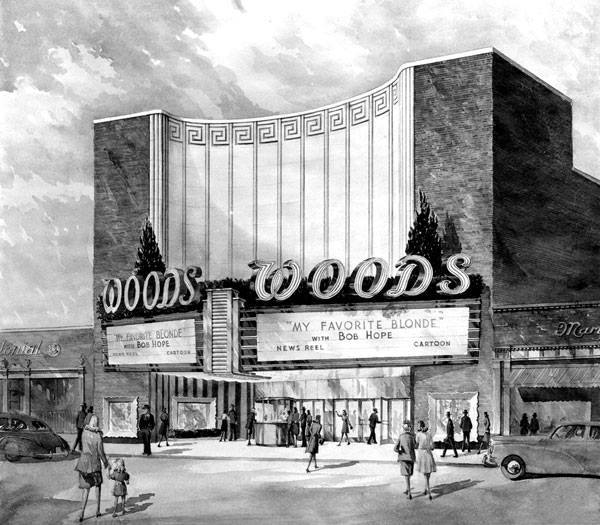 For a neighborhood house, in the suburb of Grosse Pointe Woods, the Woods Theatre was originally quite large, and seated 2,478, all on a single floor.

It was built for the United Detroit Theaters chain, opening February 18, 1948, their first in seven years, since the Royal Theatre, which was designed by the same architect as the Woods Theatre, Charles N. Agree.

This late-Art Moderne style movie theater opened with the film “Crossfire” and contained unusual features such as “Telesonic” seats for the hearing-impaired, and a good-sized exhibition gallery, which was leased to area schools and business owners.

In 1969, the year the Woods Theatre began to be jointly operated by Plitt Theatres and Nicholas George, it briefly closed as it underwent a nearly-million dollar reconstruction, converting the rear of the auditorium into a second screen. It was reopened in late-1970 as the Woods I & II, with 1,200 seats in the main auditorium and 750 in the new second auditorium.

Theater architect Louis Wiltse was hired in 1981 to transform the rear auditorium into a twin, seating 335 and 320 each. Two years later, Wiltse triplexed the main auditorium, seating 590, 312 and 305.

In the mid-1980’s, the former exhibition hall was even converted into another auditorium, one of the tiniest in the Detroit area, seating a mere 62.

Woods theatre was torn down, after being purchased by a local hospital that was after the site for years. I was an Assistant Manager at the Woods during 1962-63 while working for United Detroit Theatres.

I saw my first R-rated film at the then Woods I & II. “The Shining” (1980). It still saddens me today to drive by to see a strip mall and a parking garage in place of what once was. There were many fond childhood memories spent at that theatre.

Based on the photos located here, the theater was done in some great decor by Charles N. Agree. This unknown architect designed many great buildings and theaters for Detroit and its suburbs. This is a clearly unique decor he perfected.

For the record, The WoodsTheatre never had a balcondy. The Woods was twined by ABC Michigan Theatres in 1969-70, under the supervision of Leon Serin, V>P> and Gil Green operations managerfor ABC Michigan Theatres. The gigantic screen curtain and all useable carpet was removed and installed in the Ramona Theatre located at 6 mile & Gratiot, Detroit. The Woods seated over 2500 when it was a single screen, after twining, it seated 1200 & 750. Some of the biggest hits ever to play at the Woods, “GOLDFINGER 1963, all of the 2500 seats needed. "THE EXORCIST” 1973. The Woods served as the District Office for ABC/PLITT Theatres in the late 70’s and early 80’s. Jack Cataldo, was the V>P> in charge and Walter Goryl was the local booker. The Woods was purchased by NGTTheatres and the AMC Theatres who completed the mutiplexing to 6 screens. In, it’s day the Woods was one of Michigan, finest theatres. JerryD, I was there.

As JerryD pointed out a couple of years ago, contrary to the current introduction above the Woods Theatre never had a balcony. Boxoffice of April 24, 1948, ran an article about the Woods with several photos and a floor plan.

Really nice marquees. Owned by UNITED DETROIT THEATRES in 1956 as mentioned above. Harold H. brown was the President.With Robert Salter the purchasing agent.