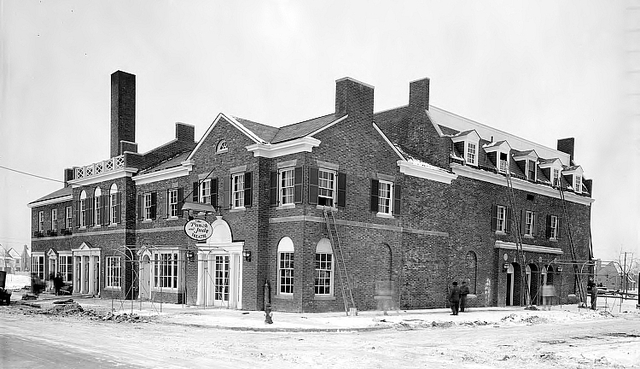 The Punch and Judy Theater opened January 29, 1930. It was was designed by Robert O. Derrick in Colonial Revival style, looking more like a Virginia country manor than a movie house. The theater seated around 740 and contained an organ, a balcony (which originally had a higher ticket price than the orchestra seats).

After it was closed as a movie theater in 1977, the Punch and Judy Theater was almost purchased by a church, which ended up being turned down by the city due to zoning laws. Later the same year, plans were made to turn the old movie house into a venue for live stage shows and concerts, but in December of that year, the city threatened to cancel a concert at the theater due to supposed safety code violations, then made the new owners sign an “anti-smut” agreement in early-1978. That same year, the Punch and Judy Theater turned to repertory films, but still the city continued to squelch the theater’s operation by banning “ticket lines of 50 or more persons” outside the front entrance.

In 1988, the beloved theater was gutted and converted into offices, though its quaint Colonial American exterior remains relatively unaltered.

What a beautiful building and theatre, the city council should be shot.

Actually I was part of the management of the Punch in the late 70’s.
We had plenty of bands play there with out any problems.
It’s where The Rocky Horror Picture Show was shown at midnight every Friday and Saturday.
Also, Sam Raimi and Bruce Campbell used the theater to show a rough cut of “The Evil Dead"
to potential investors.

Hey brooklynbobby – I was an usher at that time, under Mr. Etter. I think I remember you, before the Shaker tenure, which all but ruined the place.

I’m still pals with Marianne as well, from the concession stand.

Nice to see you still boppin around. BTW the screening of the first Evil Dead was called Within the Woods. I still have my ticket stub. All the best.

Could you send me over an email to rob@breakawayfxDOTcom (replace DOT with . just to stop spam)

Born in 1965 & living on Fisher Rd in Grosse Point until moving overseas in 1972, I have vague recollections of seeing several movies at the Punch & Judy. Perhaps one of the only reasons I’ve remembered it’s name after 4 decades is because the name was pretty unusual.

Movies I vividly remember seeing, and probably saw at the Punch & Judy, include now-classics like Charlie & the Chocolate Factory, The Phantom Tollbooth, and ??

It’s disgusting that Grosse Pointe Farms city council seemed to want to bring an end to the structure being used for performances which potentially create such happy memories. There’s got to be more to that story, as I’m sure the council members also had fond memories of the place.

I can see how the stereotypical fans of the Rocky Horror Picture Show aren’t exactly the type of people that snobby Grosse Pointe may have wanted.

I was in a BAND CALLED sOOTHSAYER IN THE LATE 70’S AND WE PLAYED AT THIS HISTORIC THEATER…AT THAT TIME IT WAS ABOUT TO CLOSE DOWN, VERY SAD…

Grand opening was January 29, 1930 showing “Disraeli”. At $5 a ticket for the opening, the theater made a statement about its clientele: high end in a high end environment. Costing almost $1,000 a seat to construct – incredibly high for a neighborhood theatre – Detroit’s wealth wanted a showplace in their ‘hood and it delivered. It even had widescreen film projection ability at the opening despite the lack of films shot in widescreen. Grand opening ad in photos and some interior shots, as well.

Final film was a premiere of “Big Meat Eater” on August 29, 1984 under the Class Film Theatre (CFT) operation.