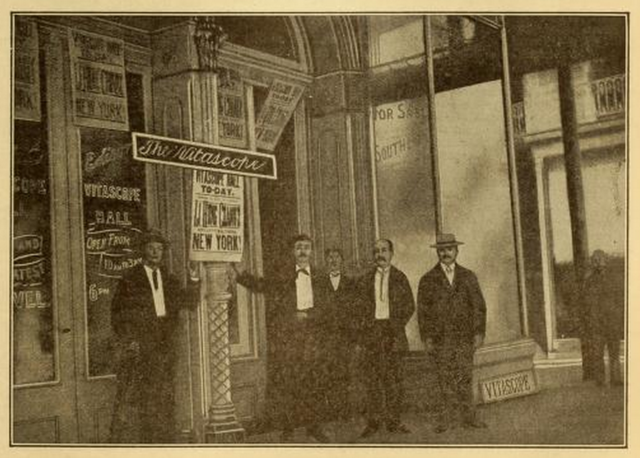 The Vitascope Hall was opened on July 26, 1896. It was said to be the ‘world’s first permanent for-profit movie theatre’.

was the original Vitascope Hall of 1896 built from the ground up with the sole intent of showing flickers or was it simple a already existing retail space redone as a movie theater?

It was a store room that William T Rock (who later became the President of the Vitagraph Company of America)hired to exhibit his Edison Vitascope, having bought the state rights for Louisiana while living and working in New York, but only because it was the only one left. He and his partner Walter Wainwright installed chairs and a projection booth and using some films he had brought with him from New York set it up as a showroom, packing them in from July to October.

In the fall of 1897 they returned to New York, having made a profit of approx $2,000 each and having sold half of their now stock of 600 films to some people in Texas for a lot of diamonds. Once back in New York they eventually set up the Vitagraph Company and became the leading exhibiting company in the country.

Read the whole story at:
https://archive.org/stream/moviwor29chal#page/n442/mode/1up

For CharmaineZoe. We at the University of New Orleans Nims Center Studio (nimscenter.com) have inherited a fairly large collection of pre-cinema optical devices many of which led to the birth of the movies. I am currently preparing an ongoing project to establish a permanent interactive exhibit of the pieces. I would be interested in talking to you about this project since you have knowledge of the New Orleans Vitascope Hall.

That’s interesting about William Rock claiming to have operated Vitascope Hall. I found something in Terry Ramsey’s book “Million and One Nights” that has a letter from Rock stating that there’s a “lot of projectors down here (New Orleans). There’s a man on Canal street with a Phantoscope with signs out side saying Edison’s Vitascope. At first I thought this was the theatre he was talking about. Guess not.

Image added via Larie Tedesco‎. Believed to be the Vitascope Hall auditorium.