Previously operated by: C You At The Movies 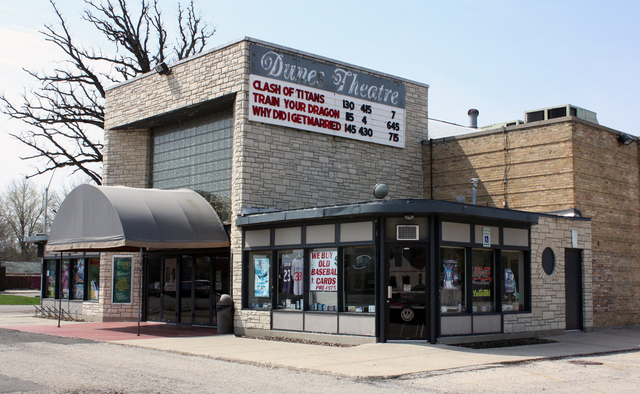 The Dunes Theatre opened in 1946 as a single screen theatre. It was triplexed, and was closed in early-2011. It was demolished in October 2014.

The Dunes Theatre in Zion, IL is a part of this chain (RMC). But there seems to be another RMC chain doing business in Effingham, Jacksonville, and Streator, IL and Waterloo all in Illinois. I was trying to find a website for the Dunes and the Liberty and all I found was a site for the above mentioned cinemas. The RMC website I found, www.rmccinemas.com wasn’t even updated—it said that all information for showtimes, party room rentals, etc., was “coming soon.”

A website shows that the Grayslake Drive-In and the Antioch were both RMC’s too.

I work at the Dunes Theater in Zion. One of our employees who has been there almost 20 years has yet to ever meet the Ryhans. We are now owned by “C” you at the movies Inc though. They also own the McHenry theaters, the Antioch theater, and the Libertyville theater.

The Dunes theater actually had a balcony a long time ago. There is still remnants of it there now, if you look in the ice room upstairs. I know people that worked there when there was a balcony.

ZION — City commissioners are kicking around the idea of imposing an amusement tax, not as a new source of revenue but to help expand Zion’s one and only movie theater. Gurnee has such a tax and boasts Six Flags Great America. Zion’s sole privately owned entertainment business is the small, old Dunes Theater at 3398 Sheridan Road, the last remaining theater in Zion, and, so far, would be the only business subject to a proposed entertainment tax. Mayor Lane Harrison said the tax probably would not be adopted. “I don’t think we even want to pursue it. There are just too many unanswered questions,” he said, pointing to the legality for a municipality to level such a tax and then rebate it to the theater for use in expansion. The suggested amount of tax would be 5 cents per ticket. Harrison said there have been talks about expanding the three-screen theater, owned by Ryan Industries, to eight screens. He stressed that the Dunes has ample room to expand into an “enormous parking lot that is unused.”

A 5 cents-per-ticket tax would generate between $25,000 and $30,000 a year, according to some estimates. If the Dunes is expanded, revenue from the tax could reach $75,000. That’s a fraction of what Gurnee receives from its 3 percent tax. Last year the village collected $2.56 million in amusement taxes, according to Jim Hayner, village administrator. “It’s a good revenue,” he said. “In fact, the best revenue apart from sales taxes.” The revenue last year included $1.75 million from Great America, $175,000 from the Marcus theaters at Gurnee Mills, $20,000 from golf courses and $1,700 from an ice rink, also at the mall.

As a leader in amusement taxes, Hayner said other municipalities would often consult with Gurnee. Zion hopes to expand its tiny amusement sector, Harrison said, citing plans to build an eight-screen movie house at the northeast corner of Route 173 and Green Bay Road. A developer has shown an interest in the project, he said. “We have the demographics for it,” he said.

Zion is seeking new revenues to fill the vacuum created when ComEd closed its nuclear generating plant, once the city’s major employer and payer of real estate taxes.

From the News Sun

Now closed. I thank because of upstairs bathrooms.

I wish it was still open. If I could, I would love to buy it and see it open once again.

After the Dunes closed, the baseball card shop operating in one of the attached storefronts remained open for another year or so before relocating. This summer the entire building was condemned and boarded up by the city of Zion… I’m afraid its future is looking rather grim.

Demolished in October of 2014.

Oooh, this was torn down? That’s too bad, I didn’t realize that at all. I wonder what future plans for this site, will be?