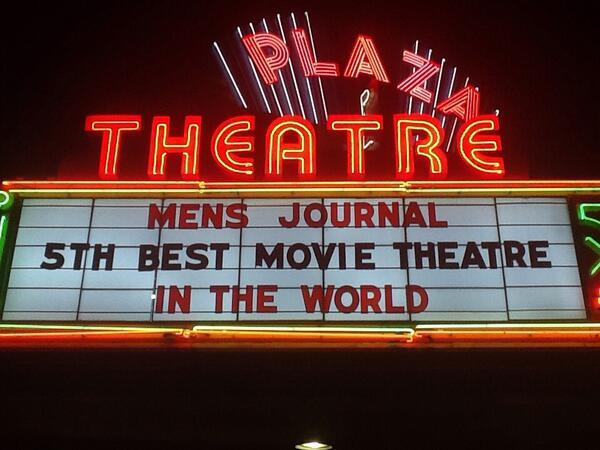 The Plaza Theatre opened December 23, 1939 with Norma Shearer in “The Women”. It had 1,000 seats in orchestra and balcony levels. It screened adult movies from 1970 to 1982. On November 1, 1985 the theatre was sub-divided and the balcony became a second screen known as the Plaza Penthouse.

First theatre in the nation to announce there playing The Interview .

Plaza total restoration completed in 2015 with new seats in the upstairs theatre . This was the last project to be completed.

So nice they still use curtains that open and close. The screen in the large downstairs cinema has a slight curve to It.

Dear Friends of the Plaza,

Four and a half years ago we started a journey to save and protect the beautiful Plaza Theatre. After losing money for a decade the Plaza’s fortunes were soon to change, in only 4 months the Plaza showed its first profit. Today the Plaza is financially sound and has a long bright future.

Over the years of my tenure at the Plaza we have achieved much together with a complete renovation of the facility, restoring the Plaza’s historic integrity while bringing state of the art technology. Our programming has been cutting edge all the while pushing the envelope.

Today I’m happy to announce that we have agreed in principle to sell the Plaza to Christopher Escobar this September. Christopher is well known in the Atlanta film community as the Director of the Atlanta Film Society and is a tireless advocate of the Plaza. I feel that our original goals when purchasing the theatre have all been met and it’s time to pass the torch so that Christopher can take the theatre to the next level.

Let me say to our patrons Thank you!!! With you we have seen a 500 percent improvement in attendance over the last four years, that’s an amazing accomplishment, your loyalty to the Plaza is what makes it so successful today.

Thank you to all the staff that helped us achieve these goals. Special thanks to my business partner John Brieger who worked so hard on the Theatre’s behalf. I would also be remiss if I did not thank Candace and the cast of Lips Down on Dixie who have always been there for the Plaza, their efforts have helped make the Plaza the success that it now is.

In 1939 the Plaza projected its first film and in 2017 the picture looks brighter than ever. And remember: movies were made to be seen in theaters.

Wishing you all the best,

The Plaza Penthouse was opened on November 1st, 1985. Ad in photo section.

We I was a kid in the early 60’s we used to collect Nehi Bottle Caps so we could get into the movies on Saturday morning. In high school went on my first date there. Lots of memories.