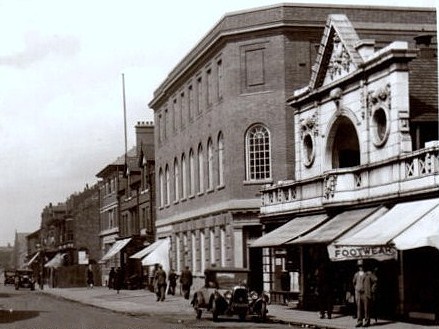 Located in Stretford, Greater Manchester. The Picturedrome was opened in 1911. It was designed by architect George E. Tonge and had an attractive white terracotta façade. In the 1920’s it was operated by Northern Combines, and was equipped with a Western Electric(WE) sound system by Lancashire Cinemas Ltd. in around 1930.

In the late-1930’s it was taken over by the Lancashire chain of Jackson & Newport, who built the nearby Longford Cinema. The Picturedrome then became a second run cinema in the town.

It was taken over in August 1950 by the Newcastle upon Tyne based chain of Essoldo Theatres (together with the Longford Cinema). The Picturedrome was closed on 13th May 1961.

It has been demolished with the neighbouring buildings to build the Stretford Mall Shopping Centre on the site.